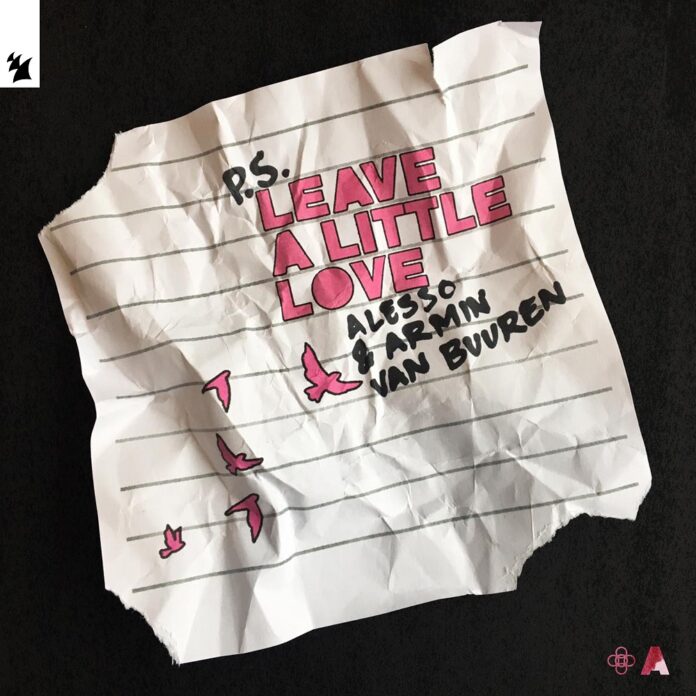 Exactly twelve days ago – not coincidentally on Valentine’s Day – the hearts of dance music lovers of all walks of life skipped a beat; Alesso and Armin van Buuren teased that they’d be releasing their first-ever collab soon. Fast-forward a short but intense twelve-day wait and that hotly anticipated moment has arrived, with the Grammy-nominated Swede and the five-time #1 DJ in the world officially releasing their debut collab on Armada Music: ‘Leave A Little Love’.

Coming with an official music video that shows the two leading industry figures racing through their respective home countries (Sweden and the Netherlands) in a virtual world, ‘Leave A Little Love’ sees Alesso and Armin van Buuren fully live up to the sky-high expectations for a collab of such magnitude. Sporting a club-tailored instrumental backdrop, super-catchy vocal lines and even a tonal transposition that lifts up listeners in the final stage of the song, their joint effort ticks all the boxes of a bona fide summer anthem.

“After years of Armin and I sharing festival stages around the world, we decided it was time for us to join forces and write a big dance song for the fans”, Alesso says. “We hope they enjoy it!”

“Everything just came together effortlessly in the studio”, Armin van Buuren adds. “I’m proud that we get to share ‘Leave A Little Love’ with the world today, because everybody deserve a bit of love in their lives.”

Hailing from Stockholm, Alesso won over his country from the very start of his career. His second single as the lead artist, 2012’s ‘Calling (Losing My Mind)’ with the legendary Swedish House Mafia’s Sebastian Ingrosso and Grammy award-winning OneRepublic frontman Ryan Tedder, was certified 2x Platinum in Sweden and reached #1 in Billboard’s U.S. Hot Dance Club Songs chart, an achievement matched later on with his 2014 single ‘Heroes (We Could Be)’  with Tove Lo. In recent years, he has produced several crossover pop records, including a collaboration with Hailee Steinfeld, Florida Georgia Line and Watt called ‘Let Me Go’. This single reached #9 in the U.S. Hot Dance/Electronic Songs chart and cracked into the U.S. Billboard Hot 100. His collaboration with Anitta, ‘Is That For Me’, made it into the Top 25 of Billboard’s Hot Dance/Electronic Songs chart and was nominated for a Radio Disney Music Award.

Armin van Buuren was voted the #1 DJ in the world for an unprecedented five times. He has ranked in the Top 100 of U.K. magazine DJ Mag for twenty years in a row now with nineteen consecutive Top 10 spots, has seven full-length artist albums to his name and recently hit the incredible milestone of 1000 episodes with his A State Of Trance radio show, through which he reaches 40 million listeners from 80 different countries on a weekly basis. In non-COVID times, Armin van Buuren headlined more than 150 shows per year at leading festivals and venues around the world, including Electric Daisy Carnival (Las Vegas, New York), Ultra Music Festival (Miami) and Tomorrowland (Belgium) plus residencies at Hï Ibiza, in Las Vegas and numerous others.