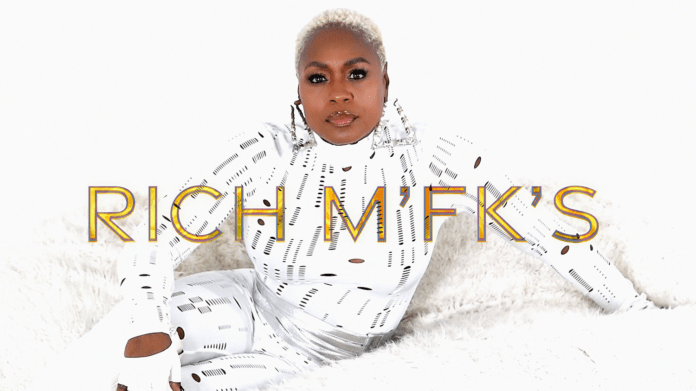 As her latest EP RICH M’FKs makes its way onto the world’s airwaves and playlists, iconic singer, songwriter, producer and DJ Ultra Naté today dropped an uncompromising video to accompany the main release.

Directed by Ultra (collaborating with new Baltimore-based talents), the video sees Ultra highlight the growing disparity between those at the very top, and the billions worldwide struggling to make ends meet.

Ultra describes the process of creating the RICH M’FKs clip, “The entire ULTRA album experience has taken me on such a whirlwind ride, it shouldn’t surprise me that I’m now in this moment of creating visual art to accompany the music that I’ve poured myself into for the last two years. I had a particular style in my head of what “RICH M’FKs” could look like and how to evolve it, so I sought out talent from Baltimore to bring the concept to life.”

She continues, “Seth Milder and Lindsey Golden were my cinematographers of choice because they are bright, energetic, talented and so easy to work with. I had worked with them previously on my Black Stereo Faith “I’m Too Sexy” video, so they were an obvious choice. They brought in Jason Sage, whose specialty is lighting design. Another key factor was editing. I hit up my good friend, the legendary Thomas Dolby and asked him about some of the kids he may have previously worked with at the film school here in Baltimore. He connected me to Sonya Norko, and she turned out to be an absolutely amazing artist to work with! My long-time friend Jonathan Knox assisted. Because of this crew of young and passionate artists, I was able to pull together all of the elements and create this piece. My music video directorial debut.”

The edit lands on the heels of key US mid-term elections, the world waiting to see which political direction the planet’s dominant superpower will take over the coming years.

“People are suffering and struggling around the world and there are those who live by completely different rules,” Ultra says pointedly. “The question becomes – what’s next? Where do we go from here and what do we do with this information as a society? The conversation is getting louder, and it feels like we are on the precipice of a major shift or revolution, but it remains to be seen.”

The track, a co-production with revered German electronic producer and DJ Henrik Schwarz, is unflinching in its critique of modern culture, one that often leaves us both individually and collectively ill at ease.

“Henrik’s warping and minimal sounds in RICH M’FKscapture the distorted reality I’m lamenting in the song,” she explained. “A lot of people have told me it captures exactly how they’ve been feeling these last few years, like the walls are closing in. RICH M’FKsfeels like despair initially but grows quickly to become more of a fight song. Those distorted and morphing sounds become the march, the stomp and fist pump of the people.”