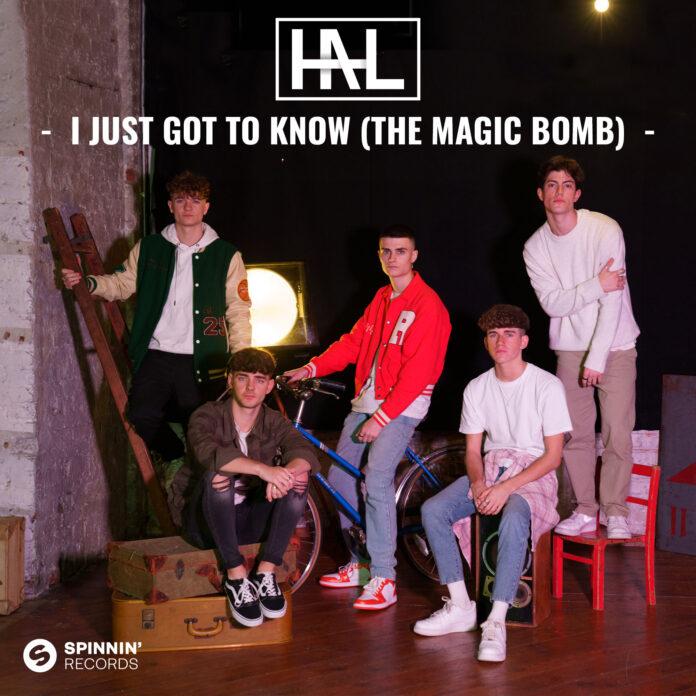 “I Just Got To Know (The Magic Bomb)” doesn’t only repurpose the famous chords and rushed beats from the online heartthrob, but adds powerful vocals, sweet hooks and a moody chorus to keep the countdown ticking. From the biggest TikTok dance trend to a emotive and inventively written pop song – Here At Last smoothly bridges the gap.

Here At Last is a relative new face to the scene dance scene. Taking off as a 5-piece band in 2021, the group quickly drew attention from a worldwide online audience thanks to their unique harmonies and fresh sounds, poured into catchy pop songs like “Tongue” and “Happy.”

This, combined with their lighthearted humor and endless creativity, led to Here At Last becoming the 5th most viewed act on TikTok in 2021 (right behind Ed Sheeran and KSI). Just a year later, Here At Last is a musical name to be reckoned with, selling out shows from London to Manchester, while attracting fans from around the globe with their heartfelt productions.

Anticipation is  understandably high when this fired up 5-piece not only makes its debut on Spinnin’ Records, but finds inspiration in last year’s explosive hit, “The Magic Bomb.” Between the original release’s 7.6 million pieces of user-generated content and Here At Last’s astounding online profile, “I Just Got To Know” has all of the makings of a 2022 smash.

Here At Last explores the ominous bass chords and rushed psychedelic beats of “The Magic Bomb,”  resetting the stage with fresh take of emotionally charged vocals. Lifted to new heights by tender guitar chords, the song evolves into a beast of its own; a moody piece of pop music that’s likely to introduce a whole new demographic of fans to the unctuous world of dance beats.

Always evolving their sound, Here At Last brings an undeniable and pristine gem to the table. Equally packed with energy and emotion, “I Just Got To know” underscores how the Here At Last’s infectious vocals and distinctive songwriting has this English 5-piece destined for success. Find the new release out via Spinnin’ Records.