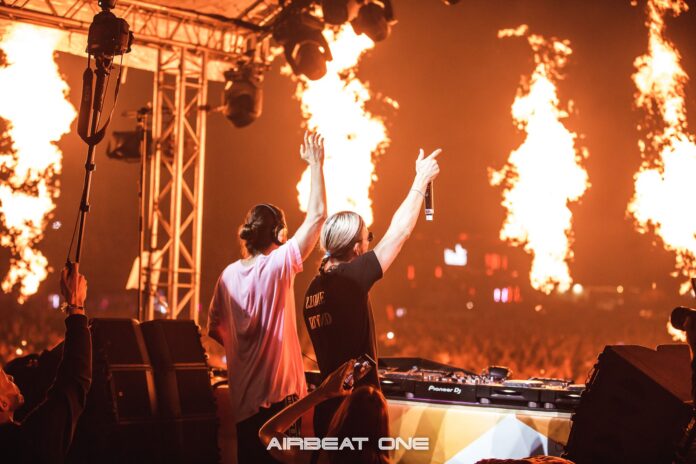 From 6 to 10 July 2022, the Neustadt-Glewe airfield will once again be transformed into an enormous festival village. As many as 65,000 people are expected to be in attendance per day at the AIRBEAT ONE Festival, they will all be treated to an incredible display of DJ musical superstars across six stages. More than 300 artists are on the unbelievable lineup of Northern Germany’s biggest electronic music festival, with many of them playing exclusively at AIRBEAT ONE this year, and nowhere else in Germany.

One of the headliners KYGO is playing exclusively at AIRBEAT ONE e for the first time, and the 65,000 fans in attendance can party along to his smash hits such as „Firestone“, „Stole The Show“, „It Ain’t Me“, „Stargazing“, „Higher Love“ and „What’s Love Got To Do With It“, this year’s amazing lineup including superstar KYGO means AIRBEAT ONE 2022 is unmissable.

The Norwegian Tropical House superstar will not only be mixing on the turntables in Neustadt-Glewe for the first time but is also doing so exclusively in Germany. He’s not set to appear at any other festival in Germany for the rest of the year. KYGO will be in Neustadt-Glewe on Friday, July 08. So if you want the chance to experience the Norwegian superstar’s exclusive German performance this year, the only way to do so is by purchasing a ticket for AIRBEAT ONE 2022.

If a lineup including superstar DJ KYGO isn’t enough, then how about the announcement of superstar DJ MARSHMELLO. Known for record-breaking hits “Alone”, “Silence”, “Wolves”, “Friends” and “Happier” amongst plenty others, is set to perform at this year’s AIRBEAT ONE Festival. Much like KYGO, the only place to party with MARSHMELLO is at this year’s AIRBEAT ONE Festival. The man notorious for DJing while wearing a mask in the shape of a marshmallow and smiley face has performed previously at the Neustadt-Glewe airfield in 2018, completely owning the Main Stage of the festival, he brought the house down with his fantastic brand of upbeat party anthems.

If his 2018 set is anything to go by, the 65,000-person crowd in attendance is in for one hell of a party this July. After two years of a Covid enforced break. Marshmello is primed and ready to create history at the Airbeat One Festival on Thursday, July 7th. And the only way you can take part in Marshmello’s unmissable main stage party is by purchasing a ticket for AIRBEAT ONE 2022.

If that’s not enough, then how about the news that legendary electronic supergroup 3 ARE LEGEND, consisting of Dimitri Vegas & Like Mike and Steve Aoki, will celebrate their only festival gig in Germany in 2022 at AIRBEAT ONE. The trio will take to the main stage on Friday, July 7, and are certain to shake to the core the foundations of this year’s incredible electronic music event.

In addition to these unbeatable artist exclusives, AIRBEAT ONE Festival has also signed two exclusive German festival partnerships for 2022. The world’s leading hardstyle label Q-dance will only be playing at AIRBEAT ONE this year, and will completely take over the program for the Gladiator Stage. The Dutch hard-dance experts will be accompanied by legends of the harder sound, icons including Angerfist, Brennan Heart, Headhunterz, Miss K8, Warface, Wildstylez, Zatox, and many more will be performing at this year’s festival.

Europe’s most exciting and colorful party label has also been signed exclusively to play at AIRBEAT ONE Festival this upcoming season. The one and only: ELROW! The Spanish music and entertainment brand originally from Barcelona, famous (and infamous) for its ocean of colorful visuals, will exclusively host the new Arena Stage on both Friday and Saturday. Specializing in its unique brand of techno and house, the iconic party pioneers are promising to bring DJ greats such as Charlotte de Witte, Camelphat, Claptone, Fisher, Kölsch, or Paul Kalkbrenner to Neustadt-Glewe.