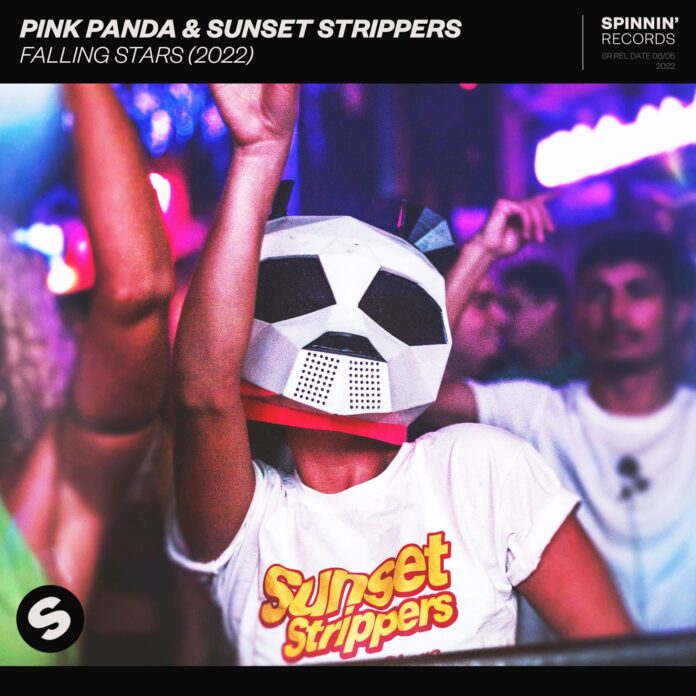 Celebrating their 10th anniversary this year, worldwide acclaimed DJ collective Pink Panda has teamed up with legendary hit makers Sunset Strippers for a revitalized remake of their 2005 smash ‘Falling Stars.’ This rejuvenated version highlights the original’s famed and euphoric vocals, as well as those slick sax swipes, while a deep house groove and smooth layer of 2022 production polish the release into a clubbing gem all over again. Better make a wish, as these “Falling Stars” are out now on Spinnin’ Records.

Back in the early zeroes, as club music was gaining popularity with an increasingly wider audience, “Falling Stars” perfectly embodied the breath of fresh air that was electronic music. Released by UK act Sunset Strippers, the trio used the vocals and melodies from the illustrious 80s hit “Waiting For A Star To Fall,” but took them to the next level with formidable house beats and ecstatic chords. The record became the outfit’s claim to fame, turning into a favoured club tune as well as reaching #3 on the official UK Singles Chart in March 2005.

Although Sunset Strippers continued to release hits up until 2008, “Falling Stars” remained their signature track in the collective minds of the dance music community.  And now after many years, “Falling Stars” lands back in rotation, as fellow UK act Pink Panda has reworked this indestructible song.

The masked DJ collective has already proven their ability to renew powerful tracks of yesteryear. Notorious for a string of remixes under the likes of Ava Max, Bruno Mars, David Guetta, Meduza, P!nk, and Sia, Pink Panda has made a steady rise to fame in recent years. This was underscored once again last year with the release of “Obsessed”, a robust club track including the hot blooded hook from Mariah Carey’s 2009 eponymous hit.

“Falling Stars” sees Pink Panda work their magic from start to finish. Honoring the original’s mesmerizing vocal lines and famed melody, the production collective has updated the original release with swerving beats, clubby FX and a groove that lands smack dab on contemporary appeal.  You’ll hear festival crowds sing along for sure, as the soaring saxophone licks will take them sky high. Simply put, “Falling Stars (2022)” is a destined crowd pleaser, uniting multiple generations in one powerful cut – may all your wishes be granted when this baby hits the floor