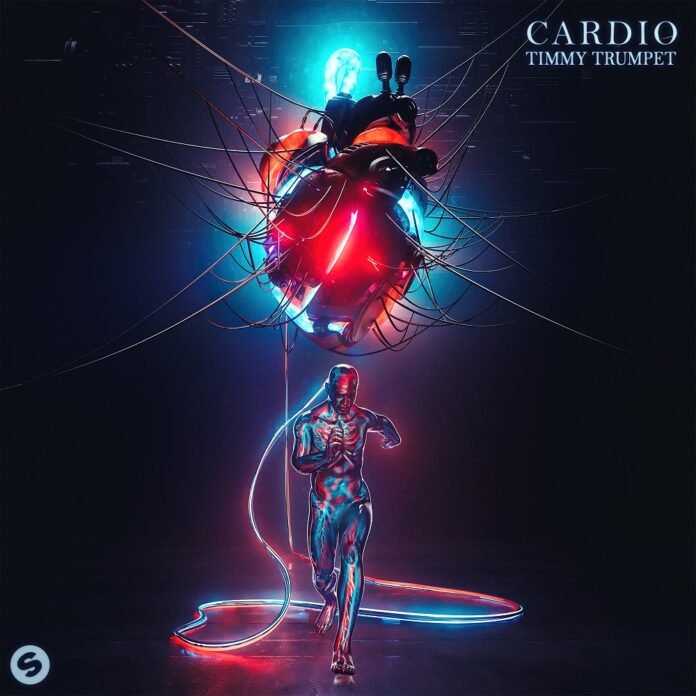 It’s time to work hard, play hard, as international man of mayhem Timmy Trumpet brings his smashing ‘Cardio’ to the Spinnin’ Records airwaves. Fueled by moody beats, rousing vocals, and of course a company of uplifting horns, ‘Cardio’ is a record that’s made to get your blood pumping. If not at a festival, then a power hour workout class, as Timmy Trumpet aims to lift everyone’s spirits with this instantly feelgood gem, out via Spinnin’ Records.

One of dance music’s biggest phenomena, both live on stage as well as in the studio, Timmy Trumpet has seen an astronomical rise to fame in recent years. The Australian DJ/producer/live instrumentalist scored numerous hits, including massive festival tunes such as ‘Freaks’, ‘Party Till We Die’ together with MAKJ and Andrew W.K., ‘Oracle’, ‘Punjabi’, ‘Rockstar’ and ‘PSY or DIE’ with Carnage.

Last year, he followed up on this with his debut album, the very aptly titled Mad World. Its title track, a collab with Gabry Ponte recent crossed the 50 million streams, while other tunes like ‘Up & Down’ (together with infamous dance act Venga Boys) and ‘Paul Is Dead’ (a collab with the legendary Scooter) have also scored tens of millions of plays worldwide

Mad World underscored it once again, Timmy Trumpet’s music can’t be pigeon-holed; it varies in flavors, from deep and instrumental sounds to raving psy and big room tunes, making every release of this acclaimed tastemaker an event in itself.

In this light, ‘Cardio’ surely lives up to expectations. Kicking off with moody synth pads and upwinding, pitched vocals, emphasizing the fact that ‘all we do is work hard, play hard’. The vibe then moves to house territory, bringing out tasty basslines and spacious percussion. Following a sweet drum fill, the beat drops in full effect, working towards Timmy’s characteristic horns and living it up with feelgood melodies, while the vocals keep you moving with “nonstop cardio”.

It’s a party tune for sure, but even if there might not be a fully charged dancefloor near you at the moment, ‘Cardio’ definitely brings a slice of festival ecstacy to your home, beach or straight up cardio session. Timmy Trumpet, known for dropping the right tune at the right moment, does it again with a tasty workout that superbly hits the spot.