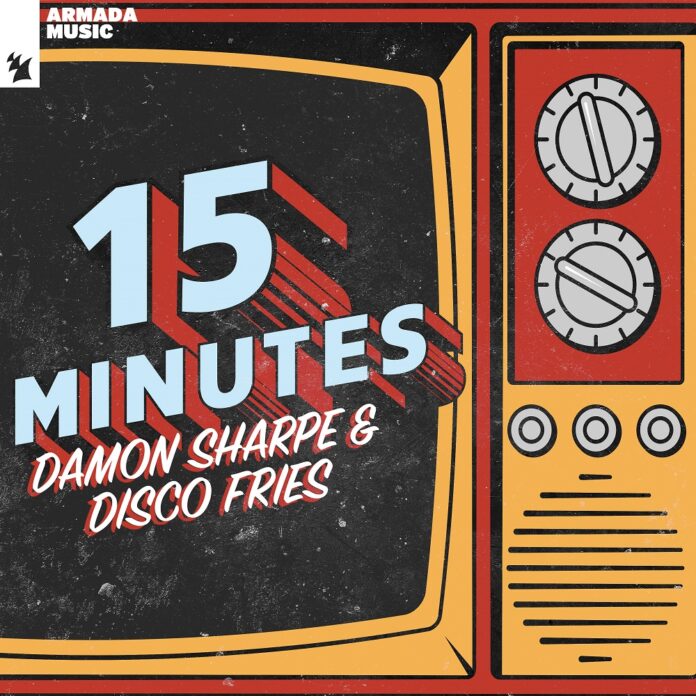 Grammy and ASCAP award-winning producer, songwriter, DJ and recording artist Damon Sharpe is best known for his creativity behind the scenes as a producer working alongside artists such as Jennifer Lopez, Ariana Grande, Pitbull, and Alesso. But what people may not know yet, is that Damon’s skills span further than just making hits for others, and in the upcoming year, the world will learn who Damon Sharpe really is, and finally see the limitless potential of his skill that has been in the making for years. We had the chance to talk with Damon, you can read the full interview bellow:

What was the inspiration behind the song 15 Minutes with Disco Fries?

It all started with a title I had on my phone and a very loose concept. I threw it out in a writing session with my frequent collaborators Cimo Frankel & Rik Annema. As usual, immediately, Rik came up with an amazing chord progression, and Cimo threw out some killer melodies. Then we ping-ponged back-and-forth and ended up turning it into a more universal concept for the actual song even though it is based on the concept of 15 minutes of fame. Once Disco Fries jumped in and put their magic on it, we knew we had something special.

We hear the video is hilarious – tell us what made you think of that concept?

The title always made me think of the Andy Warhol quote, “In the future, everybody will be world-famous for 15 minutes. “So in the video, my fictitious label boss asks me to come up with a viral TikTok hit; I blow up overnight and get Insta-famous only to turn into the stereotypical narcissist and blow it all going into a crazy downward spiral. You’ll have to watch the video to see how it all plays out! It premieres on July 27th.

Congrats on signing with Armada. What made you choose them, and what do you guys have in the works?

Armada has shown me so much love over the past few years as a producer and writer. Their belief in me gave me the confidence that they were the right home. Maykel, Jurrien, and Jeroen are very involved in the artists they sign, and that’s extremely important in building my brand.

What can we expect from “Paint the Sky”? Will the sound be similar or different than 15 minutes, and how?

Paint The Sky drops September 3rd and will definitely still tie into my current sound but has a little more festival feel to it. Very euphoric and anthemic! It features an amazing new vocalist Polina Grace who absolutely crushed the vocals.

Tell us about the moment Love Don’t Cost a Thing topped the charts – that had to be a life-changing moment.

Believe it or not, that was one of my first placements as a songwriter, and I literally went from being on unemployment and broke to being an A-list songwriter almost overnight. So, needless to say, not only was it life-changing, but I am forever grateful.

We hear you are getting more into DJing. For someone who has been behind the scenes making beats for so long, is transitioning back into a stage presence exciting, challenging?

Overall it’s super exciting. I’ve been actively DJing for about a year and a half now. I come from an artist background, so it’s kind of like getting back on the bike. Loving it.

What else do you have coming up in the next few months?

I just cowrote and coproduced the upcoming single “Safe With Me” for label mates Loud Luxury. I will also be the exclusive remixer on that one, so I’m super excited! In addition to Paint The Sky, I’ve got multiple collaborations in the works with CID, Vivid, Raven & Kreyn, Mahalo, and more!

What does the future hold for Damon Sharpe?

I’m in a great place in my life right now and feel like the sky is the limit! I think we operate from a lot of fear and pride in our lives, but as soon as we let that go and stop worrying about what other people think, we can achieve anything! So look out for more releases, collaborations, productions for other artists, live shows, episodes of my podcast on Insomniac Radio “Damon Sharpe presents Brainjack Radio,” official merch, and who knows what else!

If you could go back to the beginning and tell younger Damon one piece of advice, what would it be? Definitely, what I just mentioned above which is to just go for it and not worry so much about what other people have to say. I saw a speaker online the other day, and they said the worst bit of advice they got was “be realistic. “I’ve always operated from not having a Plan B, and it serves me well. That may not be the best choice for everyone, but I truly believe if you love what you do, are passionate, put in the work, and never give up, you will inevitably succeed. Sometimes it’s not about the most talented person; it’s about the last man standing.