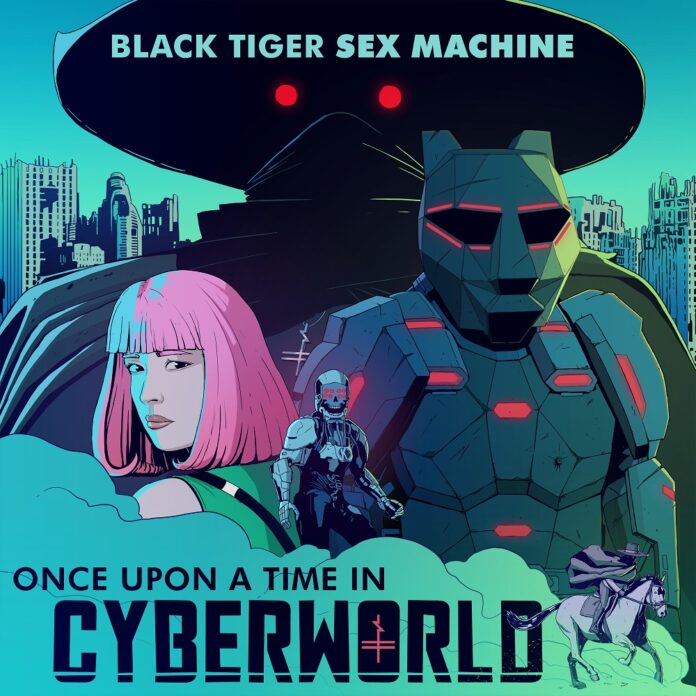 The time has come for the next chapter of Black Tiger Sex Machine’s ever-expanding dystopian world. After a massive year that saw the Montreal trio headline Red Rocks, play festivals like Lost Lands, Bass Canyon and more, BTSM are kicking off 2022 on January 28th with their highly anticipated 3rd album, Once Upon A Time In Cyberworld.

“Our post-apocalyptic universe is a bleak place where the world is crumbling. In some ways the hardships mirror what we’ve all gone through in the past couple years in real life. With this album we wanted to write from that perspective of coming in and out of hard times while still having some fight and hope left in us.” – BTSM

Coming in at 12 tracks, Once Upon A Time In Cyberworld features many familiar faces including Kai Wachi, YOOKiE, Macntaj, ATLiens, as well as new collaborators like YMIR, WODD, Wasiu and the guitarist/vocalist Ryan Perdz of TikTok fame. Previously released hit singles like “Cheatcode” and “Wild Kids” are included on the LP as well.

“It was important to us that we worked with a lot of vocalists on the album, more than ever before, as we wanted to tell these stories from unique viewpoints and be more explicit about the world-building with thoughts and emotions that didn’t just stem from our production. It was a blast working with everyone and being able to bring them into our world and add depth as characters made this a special project.”

Songs like the hybrid hip-hop anthem “Trailblazer” and the genre-bending Squid Game inspired “Front Man” are just some of the newer cuts on the album that showcase the next evolution of BTSM’s sound.  The Tigers will be taking the LP on the road through the Summer for their headlining tour as well as festivals like EDC Mexico, Ultra, Ubbi Dubbi and more. “We really wanted to push everything forward with the LP and tie it together between the next chapter of the Movie Experience, the tour and all of the visual content from artworks, posters and beyond.”