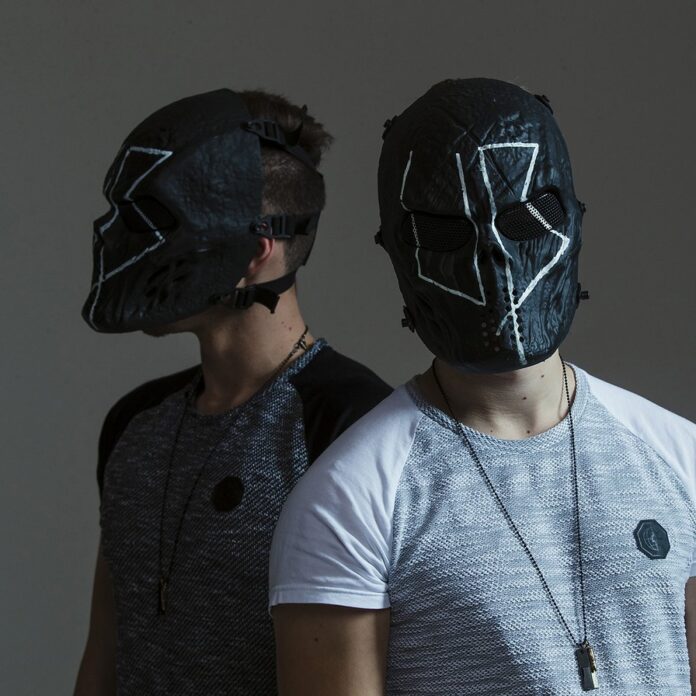 For the past four years, German artists Unknown Brain have been lighting up the YouTube world of NCS with their huge production work. Quickly becoming one of the biggest acts on the sprawling musical empire, it was only natural that they delivered the label’s first ever full length long player. ‘Faceless’, which is also Unknown Brain’s debut artist album, is a 15 track sensation that celebrates the vocal within dance music and skips flawlessly across Future House, Future Bass, Trap and even into Pop, a genre that the duo have seemingly set their sights upon.

With lockdown meaning the pair have been confined to their studios for the better part of 2020, it made it a little easier to track this elusive twosome down. EDM Nations managed to locate them somewhere between Berlin and Cologne, hard at work. Here’s what happened next…

Hey Unknown Brain! Welcome to EDM Nations, thanks for sitting down with us. Congrats on the new album ‘Faceless’. What’s the story behind the album and the name?

Hey Guys! Glad to be here, thanks for having us. So ‘Faceless’ is more of a statement than a ‘regular’ album. It is a collection of tracks we produced over the past couple years with one topic, which is that ‘music doesn’t need a face’, it just needs to be about the music. Sometimes music seems to be too much about the person who made it, too much hype and not enough substance; we want listeners to forget about ‘us’ and lose themselves in our sounds.

How was the process of making the album for you?

We started producing the first songs for this album about 2 years ago without knowing that what we were actually creating at that time would go on to be on our debut album. Since then we got more and more into it and around a year ago we decided to fully focus on it as a whole album.

Every song started differently. Sometimes we created the instrumental first and sometimes we started with the vocals. We just kept on doing what we love most – making music.

The album is a stunning cross section of the bass sound that you’re known for and a newer, more pop sound. What made you stray out of the bass world and into this pop-orientated one? How has it been received by fans?

We’ve never felt like genres are something important for us. We always try to explore different styles and try to find our own way to translate our emotions into music. So, for us pop is not a new genre, it’s more of a simplification of our music to make it accessible for a wider audience. The feedback we received was mixed but overall positive! Of course, there are people who hate changes, but hey… that’s what UB stands for! We’ll definitely keep on producing what we love!

What’s your favourite track from the album and why?

Our favorite songs are Let You Go and Phenomenon. Let You Go was the first song we made that defined our new style, which we are really proud of. Phenomenon is a super hard hitting trap song that will simply blow everyone’s mind.

What do each of you bring to the studio that makes you work so well as a team?

One of us is more of the ‘creative’ guy, who works really fast to get the ideas out of his head and into the project. He always tries to find new ways to design sounds and comes up with a lot of melodies. The other guy is more of the ‘technical’ guy who always tries to improve the sound and lift the overall quality of Unknown Brains productions. He focuses more on the mixdown and mastering of the tracks. But sometimes there are days when we both think in completely different directions and come up with something no one could even think of himself. We work really well together, we compliment each other perfectly in the studio and out on the road.

How do you feel being the first official album to come from the NCS label?

Being the first artist to release an album on NCS is a real honour for us. It’s been super exciting since we started working on it together and it’s always been the perfect mixture of fun and seriousness.

How different is it releasing music with NCS compared to other labels that use a more ‘regular’ label model?

NCS is a label which feels really familial for us. We have a connection with the whole team which makes it easier to plan and work together on the releases.

How has not being able to tour impacted your plans to promote the album over 2020?

Going on tour with the album would have been a dream for us. It’s that personal link between the music we make in the studio and the people listening to it. With live shows we could have strengthened that relationship and really helped the audience know what we feel and think while doing and playing our music live. That would have definitely helped promoting the album for sure. But we know that nobody could have expected the current situation and so we still feel that we made the best out of it. Even without touring, making the whole album is something that we will never forget in our lives.

What do you hope listeners will walk away with once they’ve listened to the whole album?

We hope the album makes them feel happy and lifts their overall mood!
Whenever we discover songs we enjoy, we get an enthusiastic, euphoric feeling that’s really hard to describe. That’s exactly this feeling that we want to give each listener at least once while listening to our tracks.

What’s next for Unknown Brain?

This is just the beginning of our journey, there is so much more to come so make sure you stay tuned…