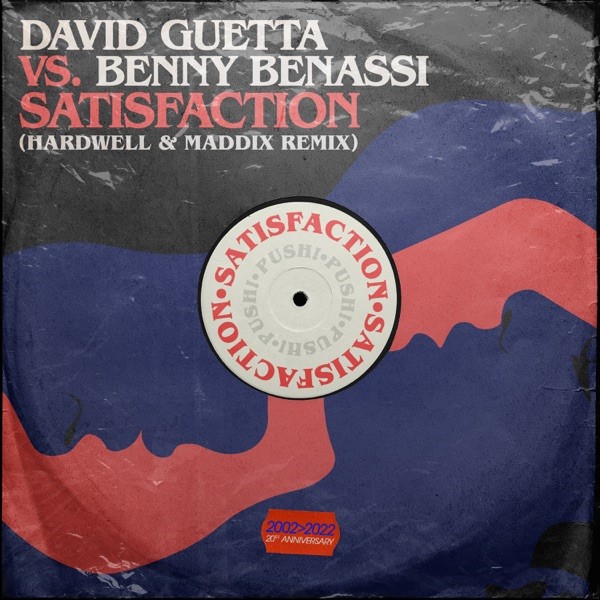 Kicking off the new year with a burst of electro energy, one of 2022’s most resounding covers receives a stellar remake. “Satisfaction” already proved its worth when David Guetta worked his magic touch on the Benny Benassi classic, racking up widespread DJ support and millions of streaming action, counting 20 million plays on Spotify alone. Now, another dream team gathered to create a next level electro weapon. In the hands of Dutch outfit Hardwell & Maddix the record gains even more power, as a raw, uptempo techno beat gets things in motion, pushed further by those notorious vocals and indestructible bass chords. Catch their vibe, as this remix is out now on Spinnin’ Records.

Following a year in which David Guetta continued to deliver worldwide acclaimed pop tunes alongside strong, oldschool house infused club gems, the French maestro also made waves with his re-imagination of early zeroes electro hit “Satisfaction.” Teaming up with the original’s producer Benny Benassi, who ringed in the new year with the new melodic techno tune “Fade To Black” with Astrality, the duo worked on a fierce new version to celebrate the 20th anniversary of Benassi’s hit, making way for gusts of big room and future rave sounds, while keeping the raw energy of the original alive.

As one of the most influential producers and DJs of all time, Benny Benassi chose 2022 as the year to come back in full force with several chart-topping releases, kicking it off with his good friend David Guetta on the iconic “Satisfaction.” The result was a beast of a crowd pleaser, wowing festival audiences this year on the wings of huge DJ support, ranging from Martin Garrix, Tiësto and Armin van Buuren to Calvin Harris, Alok and Joris Voorn. And just like the original back in 2002, the rework topped the charts worldwide, proving that twenty years does not age a true hit.

Now, adding more magic to this already spectacular tune, Hardwell & Maddix were brought to the mix to provide a raving version of their own. It marks the continuous evolution of Hardwell, who enjoyed a marvelous comeback to the festival stages last year, armed with a brand new, aptly titled album and world tour, REBELS NEVER DIE.

Together with fellow Dutch producer Maddix, renowned for his high octane blend of techno and big room, Hardwell sets off to take “Satisfaction” to its next milestone – shaking up this notorious tune to unexpected electronic heights.

Taking off on raw, thumping techno kicks, the track gains strength in viciousness, with its groove drenched in reverb ready-made for colossal techno areas. Meanwhile, the vocoded lyrics and that inimitable bass line keep going strong on this uptempo beat, reminiscing oldschool acid house when the record drops hard and heavy.

Such a muscular piece of dance music unleashed here, nicely balanced by an airy breakdown featuring the original’s vocals and electro beat, before the techno heat announces itself again, breaking out with rousing drum rolls and furious kicks. Hardwell & Maddix are on a roll, as they respectfully tear this tune apart, obviously enjoying themselves to push the energy levels as far as they can. The result is an overwhelming mix of electro, techno and big room, emphasizing both past, present and future of electronic music. A certified DJ weapon to get things going at the dawn of the year, making sure we’ll all get a fresh piece of “Satisfaction” in 2023.