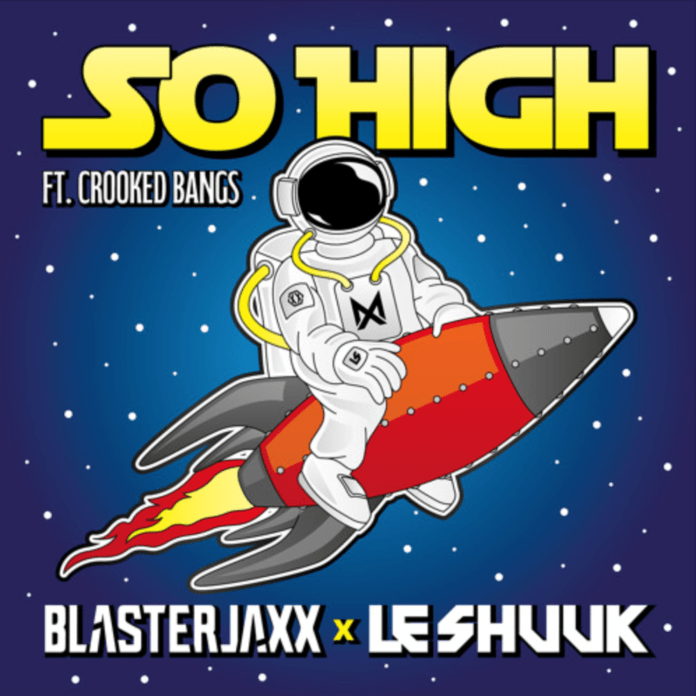 Ready to close off the year with some raw mindblowing sounds, globally acclaimed duo Blasterjaxx teams up with German hot shot le Shuuk for the adventurous new single “So High.” Lifting both acts to unexpected heights, the record builds momentum with tasty triplet beats, dramatic melodies and vintage rave vocals, courtesy of PollyAnna’s vivid artist project Crooked Bangs, only to be countered by one of this year’s heaviest hardstyle drops. Get ready to finish 2022 with a devastating bang, as these acts brings the goods to let any mainstage go “So High” you won’t know what hit you – out now on Maxximize Records.

Blasterjaxx keeps things on fire, as the Dutch duo is renowned for its strong, energetic tracks, featuring epic melodies, huge drops and touching vocals. They’ve built a world of their own, blending genres like big room, vocal house and progressive, including loads of highly praised festival anthems as well as inventing deeper, mystic themed storylines.

Following years of highly acclaimed milestones, 2022 saw the guys deliver a fresh series of hit records, from the sun drenched “Summer Jams” (with Henri PFR and Jay Mason) to the raving hard “Wasabi” (with Da Tweekaz and Maikki) and of course their global festival hit “Hurricane,” a collab with Prezioso and LIZOT.

Now, the guys bring the heat once again, teaming up with crowdpleasing German DJ/producer le Shuuk. He’s been making incredible moves these last years with his fierce rave beats, presented in various festival hits, including 2020’s “Sandmann,” “Goodbye” and his powerful collab with Ummet Ozcan in the shape of “Toast Hawaii.” In the meantime he’s been doing many high profile shows, wowing audiences at World Club Dome and Tomorrowland.

As le Shuuk will be playing the World Club Dome mainstage this Saturday 17 December, he’ll be joined on stage by Thom from Blasterjaxx to celebrate their joint effort, the incredible new single “So High,” making anticipation for the release of this song even bigger.

Surely, this is a tune to be reckoned with. “So High” sets off modest, with mysterious melodies accompanied by the vocals of Crooked Bangs, the new digital avatar and artist project of singer PolyAnna. As she muses on drifting away in ‘a space ship in the sky, so high’, the airy melody suddenly makes way for raw synth chords, piercing through the song while heavy, uptempo beats get the party started. Heavy vocals take over, triplets and ominous sound effects draw you deep into a black hole – lifting the energy levels to new dimensions. In true Blasterjaxx style, the song then breaks down into beauty, letting Crooked Bangs’ stellar vocals intertwine with heavenly melodies, erupting with blissful strings. Such a grand moment, followed by another one, in the shape of a vicious, raw hardstyle drop that’s sure to get the crowd on its toes.

Madness guaranteed when this record hits the floor, especially as enchanting melodies are combined with raving hard kicks and sounds. Blasterjaxx and le Shuuk know their way around crowdpleasers, so much was already clear, but “So High” lets them whip out one of their heaviest weapons yet – beware World Club Dome!