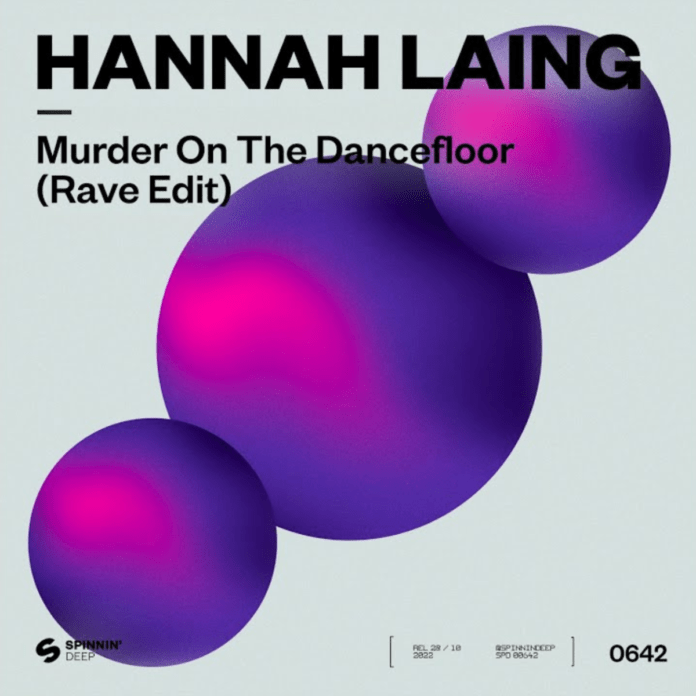 Reflecting on her huge 2021 club hit, Scottish DJ/producer Hannah Laing returns with a mighty rave edit of “Murder On The Dancefloor.” Enjoying critical acclaim with the original tune, including a wave of DJ support last year, this rework of Sophie Ellis-Bextor’s early zeroes smash just keeps on emerging in fresh guises, this time diving deeper into dark synth chords and rugged techno beats. Make way for a next round on the dancefloor, as Hannah Laing steps on the gas a bit harder, now on Spinnin’ Deep.

Hannah Laing has been coming up strong from the Scottish club scene, steadily settling her name in the global deep/tech house industry. From her earliest productions in the mid-10’s she became a favorite among the club crowds, culminating in last year’s hit “Murder On The Dancefloor,” heavily supported by DJ’s, including Peggy Gou, FISHER, Jaguar, Sarah Story, Hannah Wants and Danny Howard. From there on, she kept dropping gems, including popular tech house hits “The Records” and this year’s “Climax.”

A renowned crowdpleaser, Laing successfully opened at Creamfields last August, with a full crowd supporting her and singing along to her songs. Her video on TikTok that sees her mixing “Murder On The Dancefloor” caused a stir as well, reaching close to a million views – pushing streams on the record to further heights.

Now, as she’s prepping an ambitious club season, including a sold-out gig in Glasgow club SWG3 in December, she calls her fans to action once again, dropping a fierce new edit of “Murder On The Dancefloor.”

It’s a record that already functioned as one of Laing’s secret weapons during her gigs. “Murder On The Dancefloor (Rave Edit)” sets off on the original’s pulsating synth chords, taking them deeper while slowly building towards a resounding techno drop. In this shape, the beat comes in more raw and punchy, focusing on metallic sounding, electronically charged bass chords ahead of those familiar vocal lines.

When Ellis-Bextor’s vocals do come in, they function as a melodic tool, accompanying a sturdy kick drum and raving synth chords, all there to take the dancefloor further into a full frenzy. Laing has created a whole new monster with this production, only slightly reminiscing that zeroes pop hit in favor of a resilient, contemporary techno groove. It’s an exciting move, ready to murder the floor once again – better beware this season!