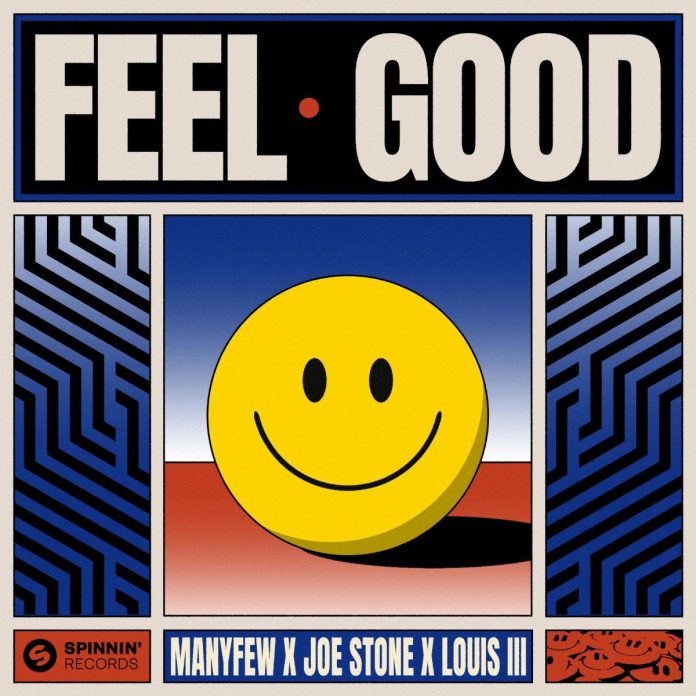 Stockholm duo ManyFew returns on a 90’s high, as it teams up with Dutch house maestro Joe Stone and UK singer-songwriter Louis III for the titillating club tune “Feel Good.” Re-imagining the chorus of Rozanna’s 1991 hit “Everybody’s Free (To Feel Good)”, the team adds colourful strokes of rhythmic piano chords and punchy bass lines, drenched in nostalgic filter effects, while Louis III drops a series of fresh contemporary vocal lines to paint the perfect picture. It’s all good when this tune hits the floor, destined for many peaktime plays the rest of the year – out now on Spinnin’ Records.

On a mission to deliver feel-good and dance-ready creations all around the globe, Stockholm-based production duo ManyFew spent the last few years lifting spirits with their distinct blend of house and disco on iconic imprints such as Axtone, Selected, Spinnin’ Records, Perfect Havoc and 3 Beat. Recently, the guys have been coming on strong, dropping festival favorites like 2021’s “Out Of My Head” (alongside Jack Wins) and this year’s hit tune “These Are The Days.”

With ManyFew’s productions drenched in classic, soulful house vibes, their music perfectly matches the upbeat sound of Joe Stone. With a particular taste for classic R&B tunes, he knows how to turn them into something spectacular.

From his 2015 debut single ‘The Party (This Is How We Do It)’ (featuring none other than Montell Jordan) to hits like “Is It Really Love,” “Freak” and last year’s Jack Wins collab “Light Up My Life” (revamping a classic Madonna song, with approval by the Queen of Pop herself), all brought dance floor magic and tens of millions of streams.

Now, these two house heads join forces with Louis III, the illustrious London singer-songwriter who’s currently enjoying a wave of success on the wings of this year’s hit tunes “Anywhere” (together with Sigma) and the YouNotUs collab “Samba.”

“Feel Good” follows the uplifting sound these artists are known for. Kicking off with a warm, filtered house groove, Louis III’s lively vocals immediately set the tone, sharing original lyrics that breathe a dire need to party, bursting out into the famous chorus ‘everybody’s free to feel good’. In the meantime, gentle piano chords gain strength alongside punchy rhythms, dropping into a highly euphoric drop.

Characteristic for these acts, the beat mixes oldschool 90’s breakbeats with a mellow groove, deep and bouncy, shifting quickly between the chords and vocal parts, making it a true 2022 club tune, but with its soul firmly in the heyday of house music.

Produced by an international line-up like this, you’ll hear lots of ideas and creativity going round as “Feel Good” unfolds, while the energy and positivity of that 1991 Rozalla hit keeps going strong. It’s what makes this unique production an amazing tribute to a song more than 30 years old – feeling better than ever.