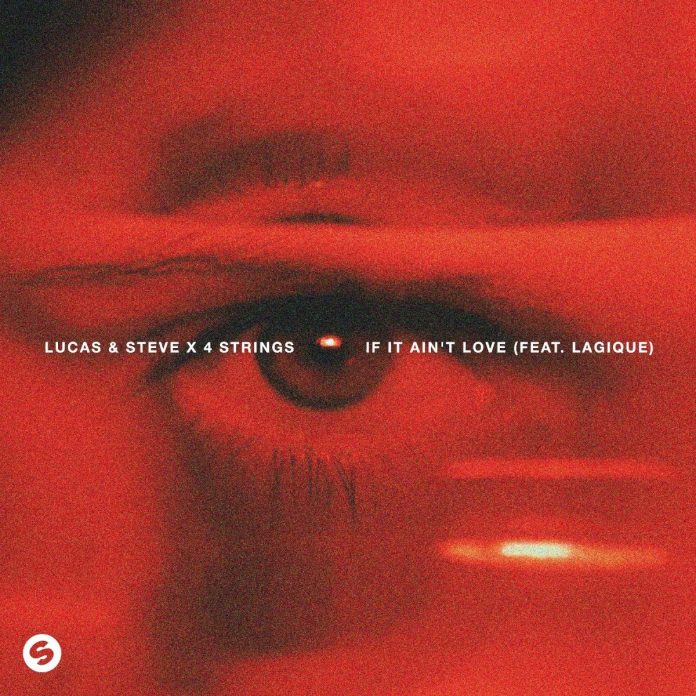 Lucas & Steve deliver the dreamed soundtrack for this indian summer, teaming up with legendary dance act 4 Strings for the sultry tune “If It Ain’t Love.” Featuring the lively vocals of Lagique, the record builds on a gentle deep house groove, warm bass lines and sweet, rhythmic piano chords. Enticing flute melodies recall one of 4 Strings’ biggest hits from back in the zeroes, trance classic “The Silmarillia,” this time packed into a powerful pop song, bursting out into a chorus that lets Lagique scream out for love. Such a creative blast from the past, out now on Spinnin’ Records.

Critically acclaimed DJ/production duo Lucas & Steve has built a solid reputation throughout the years with its delirious festival shows, ongoing hit productions and worldwide chart success.  Their discography is endless, as are the credentials, including 2020 debut album Letters To Remember, and recent collabs with Tiësto (for last year’s smash “Oohla Oohla”), Galantis (“Alien”) and Afrojack & DubVision (“Anywhere With You”).

Fellow Dutch duo 4 Strings counts as Lucas & Steve’s early century’s counterpart. Already making waves in the 90s burgeouning trance scene, the guys turned solid tastemakers in the zeroes, delivering a series of trance infused hits like “Take Me Away (Into The Night),” “Let It Rain” and “Turn It Around.” Up till this day, their reputation for delivering genre defining anthems lives on, speaking to every new generation of electronic music lovers.

“If It Ain’t Love” is a wonderful example of the everlasting impact their songs still have. Originally a trance hit by Carlos (part of 4 Strings) under the title “The Silmarillia,” the record continued to make waves in a widely popular 4 Strings version, turning into an early century trance classic on the wings of those lively beats and characteristic panflute melody.

Now, the record emerges once again, as part of a teamup between Lucas & Steve and 4 Strings, who embed that timeless melody in a contemporary electronic pop song, bursting of strong hooks and emotionally driven lyrics. Featuring the delicate vocals of Lagique, best known for his featuring on Ofenbach’s huge hit “Wasted Love,” the song sets off with moody chords, dropped over warm mid-tempo beats, but progresses into a chorus that breathes a dire need for love.

While these feelings are screamed out in the most soulful way, the underlying mood is enhanced by that famous panflute melody, perfectly emphasizing the melancholic vibe of the song. It’s the blend of those two sounds that’s sure to create a spark of recognition with generations of dance music lovers, bound to highlight radio and streaming playlists these coming months. “The Silmarillia” lives on, if this ain’t love…

“We are very honored to be asked by 4 Strings for a collaboration. We used to play the music of 4 Strings on repeat in the past. One of those tunes is the trance classic “The Silmarillia.” This inspired us for “If It Ain’t Love” (ft. Lagique). We’re excited about the end result and can’t wait to share this with our fans.” – Lucas & Steve.