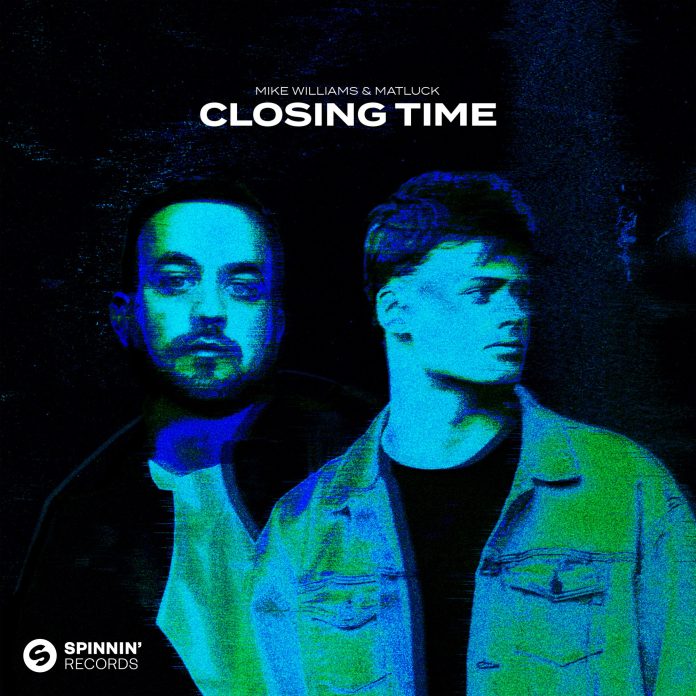 Delivering a fresh and exciting sequel to their 2017 collab, the mighty Mike Williams joins forces again with Los Angeles based, Emmy Award-winning, Grammy-nominated artist Matluck  for the soft-hearted, uplifting pop tune “Closing Time.” Both classically trained on piano since childhood, the record bursts of tension building melodies and extraordinary hooks, enhanced with powerful vocals and electronic highlights. The result is a rare piece of power pop, letting an emotional ballad explode into a wave of electronic bliss, making this a tune to treasure in your heart forever – out now on Spinnin’ Records.

Hailed as one of the new stars in dance music, Mike Williams has covered illustrious tracks since his break to fame in the mid-10’s. By now, every move the Dutchman makes is received with huge DJ support and enthused festival crowds, responding to his ever melodic approach and anthem styled tracks, including successful collabs with Tiësto, R3hab, Felix Jaehn, and Mesto.

Back in the day, as Mike Williams was making moves with his early Musical Freedom hits “Sweet & Sour,” “I Want You” (the massively popular collab with Tiësto) and “Bambini”, he also dropped the pop infused 2017 single “Another Night” at Spinnin’, featuring the upcoming US artist-songwriter Matluck. A powerful song with moody electronic vibe, the record reached a global audience, by now counting 10 millions streams on Spotify alone.

It marked the beginning of a new era, as Mike Williams would conquer the world with his inventive, melodic tunes, while Matluck continued to write impactful songs alongside artists like Armin van Buuren, Matisse & Sadko, Afrojack and Nicky Romero & Stadiumx. Securing sync placements in noteworthy movies (like 22 Jump Street and Get Hard) and several TV shows led to further acclaim, including the win of a prestigious Emmy Award in 2018.

By now, both count as seasoned artists, making their renewed collab the more exciting. “Closing Time”  builds on the magic they had before, providing much room for Matluck’s touching vocals, building momentum over delicate guitar chords. Although the mood sounds desperate, with Matluck singing he’s ‘at the bottom of a bottle, all out of excuses,’ a slumbering beat provides a ray of light – a mark of the excitement that’s going to follow soon.

While the song grows towards an emotional chorus, Mike Williams shows his craftsmanship with mighty swelling chords and spacious sound effects. And then, a powerful drop redeems us, unleashing grand synths, melancholic and punchy, begging for screams of excitement as the beat pumps in full force.  It’s the anthem to balance the ballad sung here, underscoring (again) how fruitful a collab between Mike Williams and Matluck can be. Such an emotional rollercoaster – better stick around until ‘Closing Time,’ cause these guys are sure to touch your senses from start to finish.