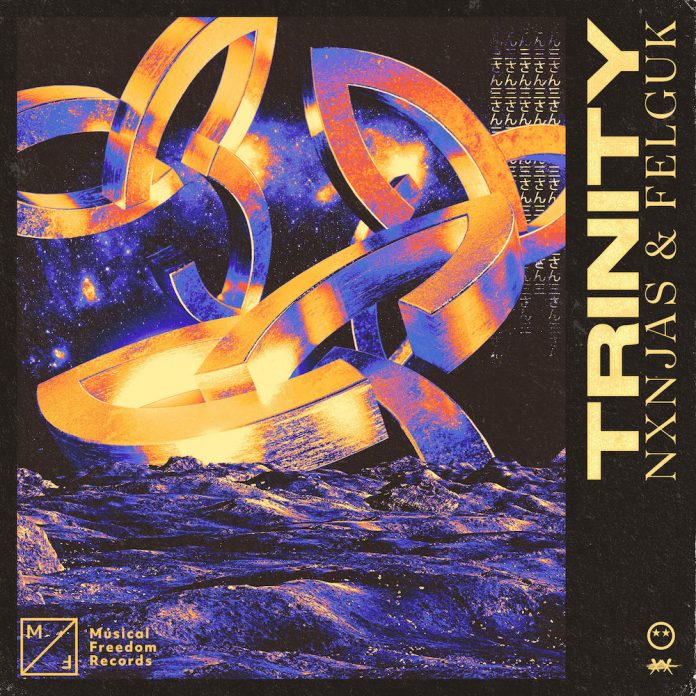 ‘Trinity’  Following an impressive wave of DJ support, kicked off by Tiësto playing this song on Ultra’s mainstage, one of Brazil’s tastemaker dance acts Felguk returns to Musical Freedom with the blazing single “Trinity.” This time, Felguk hooked up with debuting duo NXNJAS, delivering a raw and provoking bass house tune, steady in the groove while unleashing feverish pulsating chords, sure to mesmerize any crowd.

While NXNJAS may be a new alias, half of the burgeoning brand is comprised of industry veteran and Trance titan Shogun, who has been blazing through the year with a string of original productions and official remixes. Using their NXNJAS identity, the duo aims to crank out festival-primed anthems designed to raise heartbeats across the dancefloor. To make their official debut extra special, NXNJAS partnered with one of Brazil’s most renowned dance acts, Felguk, who has been making waves in the industry since the late zeroes.

Felguk is one of the Brazil’s few dance acts who truly needs no introduction, thanks to globally renowned releases like “Monday,” 2018’s remix of “Ai Ai Ai” (alongside Catdealers), and recently re-released classics such as “2Nite” and “Side by Side.” Additional accolades include remix credits for the likes of David Guetta, Black Eyed Peas, and Madonna, proving once again that Felguk’s sound transcends the Brazilian dance scene.

Felguk hasn’t graced Musical Freedom since 2020’s club hit “Game Boy,” which makes this new release alongside NXNJAS all the more exciting. Teaming up with up and comers NXNJAS for “Trinity,” which marks a promising new chapter, immediately kicked off by a blazing, hands in the air crowdpleaser. Revolving around deep, pulsating synth chords, the record from NXNJAS & Felguk explodes into a massive house beat, featuring sturdy electro bass lines and powerful percussion. At its peak, the beat breaks down, making way for those punchy synths and mesmerizing build, hypnotizing the crowd before the beat finally drops.

“Trinity” is house music in its most essential form. Delivering true festival energy with its fierce, bass-driven beats, while diving deep in sound design and unleashing adventurous chords and effects. SImply put, this record exists to ignite a party. A true DJ weapon, delivered by upcoming heroes NXNJAS and the seasoned sounds of Felguk – you can’t break this “Trinity.”