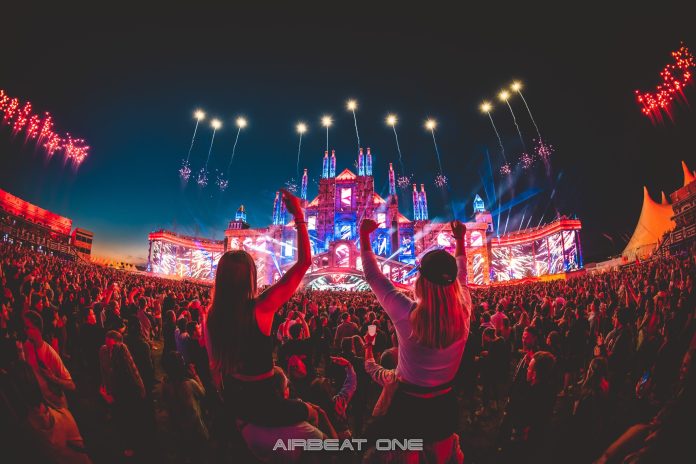 „Ciao Neustadt-Glewe – Arrivederci AIRBEAT ONE 2022“ was Sunday’s motto after four days of incredible electronic sounds at the Neustadt-Glewe airfield in Mecklenburg-Vorpommern. From an audience of 20,000 visitors at the PreOpening to 65,000 who attended Sunday’s epic closing, more than 200,000 fans were in attendance over the four days, traveling from more than 50 countries around the world for the 19th edition of AIRBEAT ONE. After a two-year pandemic enforced hiatus, the festival was a spectacular successful comeback. With more than 300 international DJs across the 6 stages, this year’s festival officially had the largest most musically diverse electronic music lineup in AIRBEAT ONE history, more acts than ever before played to the huge crowds at Neustadt-Glewe, which for an entire weekend was recreated as a spectacular Italian city. The theme of this year’s four-day open-air event was “Italy” and in honor of the theme, four of the six large stages shone thematically in reference to the great mythology of the country that lies south of the Alps.

Electronic music fans from every continent travelled to Mecklenburg-Vorpommern to celebrate AIRBEAT ONE’S 19th birthday, along with many of the world’s greatest living DJs. From Australia to America, from Japan to Mexico, from Norway to South Africa, people travelled on pilgrimage to the grand airfield in Neustadt- Glew to celebrate in peace, and to enjoy a carefree 96 hours of exuberant hedonism, beats, and bass.

The huge showpiece of the festival each year is the enormous MainStage, which never fails to capture the attention of the hundreds of thousands of festival-goers in attendance. The detail invested in the main stage was incredible, as a huge collage of monumental images from this year’s theme country. This year festival-goers danced amongst four main Italian cities, Milan Cathedral, the Coliseum in Rome, the Leaning Tower of Pisa and the Rialto Bridge in Venice formed the backdrop of the MainStage, setting the scene for the world’s biggest DJs to play some of the greatest electronic music tracks in the industry. With a width of 160 meters and a height of nearly 50 meters, AIRBEAT ONE remains one of the largest mainstages anywhere in Europe. So much so that AIRBEAT ONE’s MainStage stands at the maximum height available for any festival in Europe due to the size of the machines and equipment available for the construction of all festival stages.

The 30-meter tall Hardstyle Stage was inspired by Roman Gladiators and designed for the first time by the AIRBEAT ONE Festival designers themselves. From this year on, fans of the harder sound of electronic music can look forward to a completely new stage every year to match the festival theme. In 2022, the helmet and swords of ancient Roman warriors were enthroned above the DJ booth. From the Terminal Stage, a huge mask from the Venetian Carnival looked down on visitors in Europe’s largest circus tent. With the Arena Stage, a completely new techno area celebrated its premiere at the AIRBEAT ONE 2022 Festival. On the first day of the festival, Boris Brejcha took over the scepter with his FCKING Serious Brand and fitted in perfectly with this year’s theme thanks to his iconic Venetian mask. On Friday and Saturday, the Elrow Showcase featured the best acts of the entire techno scene, including Charlotte de Witte, Fisher, and Paul Kalkbrenner. The theme of this stage was Rome Olympics. In keeping with the Italian theme, the guests and music fans in attendance celebrated together with 60 entertainers and confetti, Elrow remains an unparalleled show of fantasy, fantastic music, and fun.

The Second Stage led visitors into a psychedelic parallel world inspired by Leonardo Da Vinci and bright vibrant colours. Together with the Lidl Stage in the Main Camping area, almost all styles of electronic music were represented, played to an ecstatic crowd across a total of six floors, from EDM to trance and progressive, from hardstyle, hardcore, and gabber to techno, minimal, house and psytrance.

With its unique main stage design and one of the most impressive DJ lineups in Europe, AIRBEAT ONE has cemented its place in the top 3 of any festival across the continent, and easily in the top ten coolest festivals in the world. The biggest DJs in the world regularly pay homage to the festival. US Superstar DJ Steve Aoki said: “This is my favourite AIRBEAT ONE show I have ever done.” And Armin Van Buuren enthused, “I love AIRBEAT ONE, it feels like the oldest festival ever.” The exceptional reputation and international standing of the festival is also recognized from the fact that international superstar DJs Kygo and Marshmello performed exclusively in Germany at this year’s 2022 festival.

A total of 37 DJs currently ranked in DJ Mag’s illustrious Top 100 DJ list played at this year’s AIRBEAT ONE. A record that no festival in Germany has ever achieved before. Five of the superstar DJs sent the 30,000 music fans into raptures of excitement during Wednesday’s pre-opening. In addition to Tiesto and Marshmello, the highlights of the first day of the festival included Boris Brejcha, Brennan Heart, Robin Schulz, Timmy Trumpet, Vini Vici, and W&W.

The German festival debut of Norwegian superstar Kygo was spectacular. From „Firestone“ to „Stargazing“ and „Remind Me To Forget“ to „Higher Love“, he certainly showcased all his incredible hit songs, and the crowd reciprocated with huge reactions. The crowd reaction was so loud and passionate, that it felt that the noise could have been heard as far away as Italy. The AIRBEAT ONE festival crowd was honored to be treated to the premiere of Kygo’s new single „Lost Without You“, which was released on Friday in unison with his mesmerizing festival performance.

Charlotte de Witte, Paul Kalkbrenner, Oliver Heldens, Danny Avila, Will Sparks, Alok, Fedde le Grand, Dillon Francis (exclusive German performance), Tchami, Ferry Corsten, and VIZE really encouraged the AIRBEAT crowd until the finale on Day 2. Steve Aoki and Dimitri Vegas & Like Mike DJs considered the best in the world by many, played one after another, shaking the airfield to its core, the trio treating the ecstatic crowd to a German exclusive and extremely rare 3 Are Legends festival set.

Saturday deliciously delivered with Claptone, Fisher, Marianna Bo, DJ Snake, Martin Solveig, Afrojack, Don Diablo, Lost Frequencies, and KSHMR, each and all superstar DJs of the highest order. Dutch Superstar and many times voted Number 1 DJ in the World, Armin van Buuren captivated the AIRBEAT ONE crowd, with massive tracks such as „Blah Blah Blah“, „Ping Pong“ to “Repeat After Me”, he played countless festival hits and so much more, even treating the AIRBEAT ONE crowd to the premiere of his new single “Superman”, for the first time live in Germany. Afterward, fireworks lit up the sky, leaving 65,000 fans in open-mouthed awe in front of the MainStage, an incredible festival moment, contained within the 19th edition of a festival with so many unforgettable moments. More than 200,000 visitors from more than 50 nations across four days were undoubtedly overjoyed to finally be allowed to party carefree at a festival again for the first time in two years. Neustadt-Glewe once again welcomed the world with open arms. The residents celebrated at the airfield together with the guests on Wednesday and Thursday. For years they have been invited by the organizers to the pre-opening and the opening of the festival.

Police, rescue workers, and other authorities involved were on hand with help, advice, and support but in a true expression of festival spirit received happy and respectful cooperation from everybody at the festival. As the 19th edition of the AIRBEAT ONE Festival closed, not only was the date for the 20th anniversary announced but so was next year’s festival theme. From July 5th to July 9th, 2023, the electronic music world in Neustadt-Glewe will celebrate the “Home Edition”, a theme chosen as the 20th celebration will be celebrated at home surrounded by festival friends. Advance sales for the momentous 20-year festival anniversary will begin this September 3, 2022.