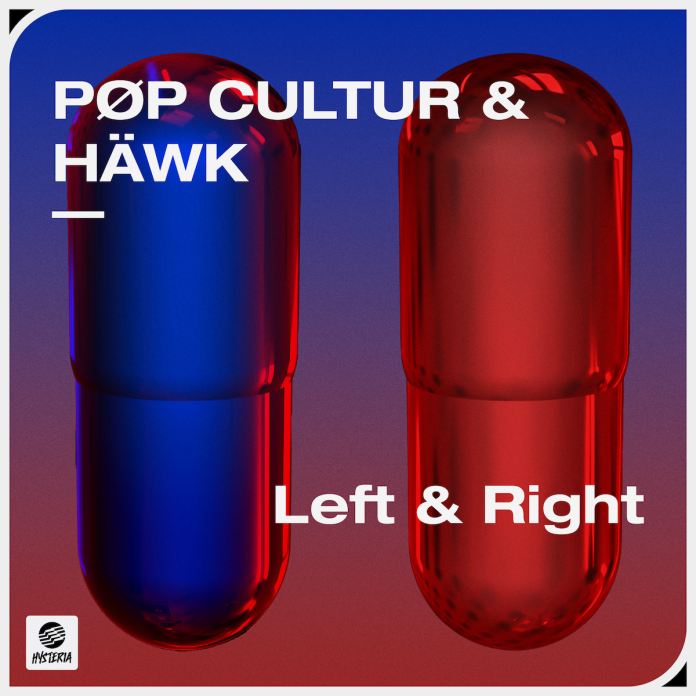 Fans can rejoice, as PØP CULTUR & HÄWK realign musical forces for the new single “Left & Right.” Out via Hysteria Records on June 17th, the new release is a sharp, melodic, and percussive whirlwind of sound, everything that fans have come to expect from the two rising acts. “Left & Right” is the first time that PØP CULTUR & HÄWK have crossed musical paths since 2021’s “Suga Suga,” but the new release shows that the duo’s creative energy continues to get sweeter and sweeter.

Italian tastemakers PØP CULTUR are relative newcomers to the scene, but hit the ground running in 2018 with their debut release, “Tell Me Baby.” Since then, their upward trajectory has been momentous, releasing on a who’s who of labels, including Spinnin’ Records, Revealed Recordings, and Protocol Recordings. The duo has found a perfect creative collaborator in fellow Italian producer HÄWK, releasing consecutive hits including “Close To Me,” “Stoppin’,” and the aforementioned “Suga Suga.”

Fellow Italian producer HÄWK has had a similar rise to fame in recent years, breaking onto the scene in 2019 with the swagged out release of “I’m Rich.” The following years have seen HÄWK separate himself from the pack, both as a solo artist and valued sonic collaborator. From his take on “No Diggity” to the beautifully revised “Freed From Desire” HÄWK has proven his ability to create a modern hit time after time.

Whether they’re going left or right, it’s clear that both PØP CULTUR & HÄWK are destined to continue their upwards trajectory. Catch their new release, “Left & Right” out via Hysteria Records.