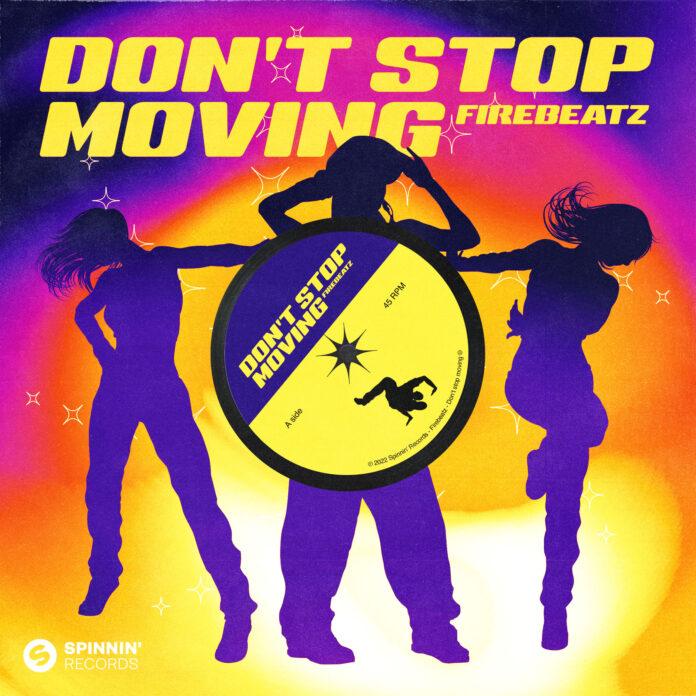 Mainstage monsters Firebeatz are back with their latest timeless hit, rebooted into a cool 2022 festival hit. “Don’t Stop Moving” is a blazing trip into 90’s house music, featuring an undeniably feelgood bassline, exhilarating piano chords, and sweet, soulful vocals, taking you straight to the heyday of house classics.  It’s all you want as summer is officially kicking off now; uplifting vibes by an optimally performing Firebeatz, released by house music aficionados, Spinnin’ Records.

Renowned Dutch duo Firebeatz are known to drop a crowdpleaser with just about every release. Ever since their first milestone releases in the 2010s, wowing audiences with a string of huge EDM festival classics, the duo simply hasn’t stopped evolving their sound. Exploring everything from big room and electro house to pop and disco styled tunes, Firebeatz have defined their signature sound with a stamp of true quality.

Recently, the duo turned to a more vintage house sound, in 2019 releasing the soulful effort “Lift Me Up” together with Oliver Heldens and Schella, reaching over 30 million streams while also undertaking further collabs with Plastikfunk and Dubdogz.

“Don’t Stop Moving” perfectly follows this expansion. Reworking the eponymous 90s hit by Livin’ Joy, the guys have nicely caught the raw and unadulterated excitement of that particular era. Setting the tone with the original’s famous lead melody, the mood is instantly cheerful – only to be lifted further with radiant piano chords and vibrant, uplifting vocals