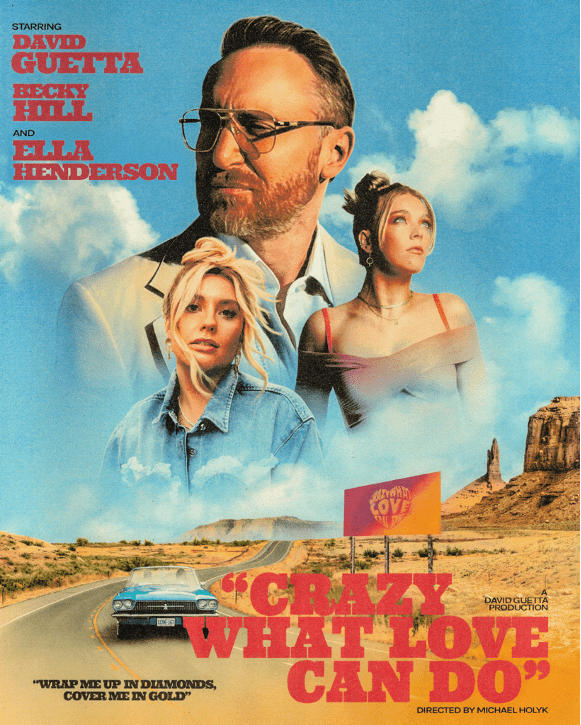 David Guetta, Becky Hill and Ella Henderson have released the official video for their hit collaborative single ‘Crazy What Love Can Do’, out now.

Shot between Barcelona and Miami, the cinematic official video for ‘Crazy What Love Can Do’ directed by Michael Holyck (Noir Productions) is framed as the trailer to an action-packed B-movie, with all three artists taking centre stage for this gripping melange of romance, violence and suspense. A certified smash, the track is currently sitting at #18 in the UK ‘Top 20’, as well as #2 and #6 on the iTunes UK and Global iTunes charts respectively. This follows early support from the likes of BBC Radio 1, MTV UK and numerous other tastemaker platforms.

In typically prolific form, ‘Crazy What Love Can Do’ follows Guetta’s latest mammoth collaboration with Joel Corry and Bryson Tiller, ‘What Would You Do?’, which has already amassed over 11 million Spotify streams and gained extensive support from BBC Radio 1, Kiss and Capital FM. He was awarded world’s best DJ in the coveted DJ Mag ‘Top 100’ poll, just won ‘Dance Act of the Year’ award at this year’s iHeartRadio Music Awards, and also remixed the Kodak Black global smash ‘Super Gremlin’. Joel, Kodak and Guetta’s Future Rave partner Morten all joined him onstage for an incredible set at this year’s Ultra Festival in Miami, before Guetta headed to Vegas to kick off his residency at Encore Beach Club.

Following her Best Dance Music Act win at this year’s BRIT Awards and her 15th Top 40 UK hit, the recently released ‘Run’ (with Galantis), Becky Hill has cemented her reputation as the Queen of Dance music. With a BPI certification total of 9 x platinum, 4 x gold and 1 x silver records, Becky was the third most streamed British female solo artist on Spotify last year (behind Dua Lipa and Adele). The release of her Top 10 debut album ‘Only Honest On The Weekend’ saw her score five Official Chart Top 40 singles including her collaboration with David Guetta, “Remember”, which was one of the most streamed and best-selling songs of 2021.

Meanwhile Ella Henderson recently landed her second Top 10 album with ‘Everything I Didn’t Say’ and has ascended to a multi-platinum selling, 2x BRIT Award-nominee, with a No. 1 debut album (‘Chapter One’) and over a billion streams, all by the age of 26. To date, Ella has achieved five UK Top 10s as a lead artist, the most recent being ‘Let’s Go Home Together’ with Tom Grennan – one of 2021’s biggest songs. The show-stopping official video for ‘Crazy What Love Can Do’ is the perfect visual accompaniment to a track that seems destined to become the sound of summer 2022.