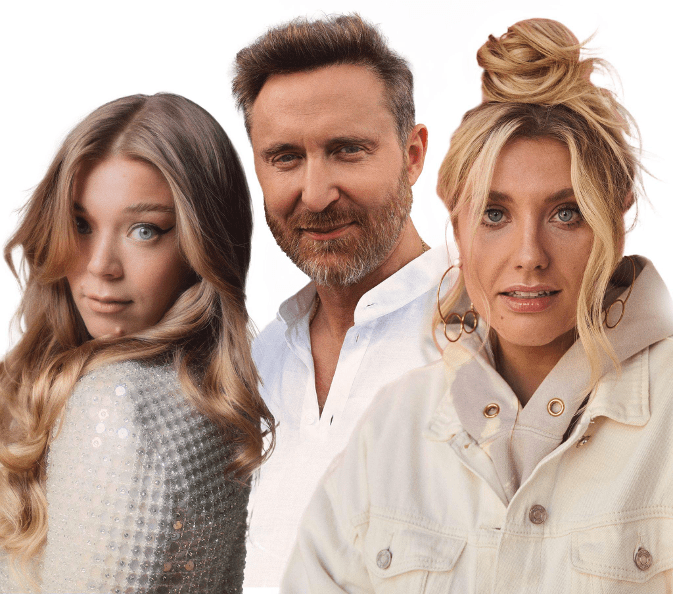 David Guetta, Becky Hill and Ella Henderson have released their collaborative single ‘Crazy What Love Can Do’, out now on Parlophone. A cinematic music video for the track, shot in Barcelona and Miami, is set to follow next week.

“Crazy What Love Can Do” announces itself with the soaring, instantly-recognizable vocals of both Becky Hill and Ella Henderson and pairs feelgood piano chords with euphoric drops – a combination that’s destined to make it the sound of summer 2022. The single has already had a tremendous start with confirmed support with BBC Radio 1’s Best New Pop and Party Anthems shows. Not the first time Guetta and Hill have joined forces, it follows their 2021 hit collab ‘Remember’, which has garnered over 150 million streams to date.

In typically prolific form, ‘Crazy What Love Can Do’ follows Guetta’s latest mammoth collaboration with Joel Corry and Bryson Tiller, ‘What Would You Do?’, which has already amassed over 8 million Spotify streams and gained extensive support from BBC Radio 1, Kiss and Capital FM. He was awarded world’s best DJ in the coveted DJ Mag ‘Top 100’ poll, just won ‘Dance Act of the Year’ award at this year’s iHeartRadio Music Awards, and also remixed the Kodak Black global smash ‘Super Gremlin’. Joel, Kodak and Guetta’s Future Rave partner Morten all joined him onstage for an incredible set at this year’s Ultra Festival in Miami, before Guetta headed to Vegas to kick off his residency at Encore Beach Club.

Speaking more on the single, Guetta comments “This to me is a summer dance record, and I think it spreads an important message of love and just how powerful it is. I really enjoyed working once again with Becky, since our first successful single ’Remember’, and working with Ella for the first time was also very exciting. It was a pleasure to work with both these incredible artists.”

Becky shared her thoughts on the song, “I fell in love with this record the moment I heard it. Cooked up by the incredible musical chefs Rob Harvey, Jordan Reily and the most amazing Ella Henderson. I was sent it by David Guetta and I knew Ella and I would sound perfect together. It’s a shame that women don’t duet together more regularly so I’m glad me and Ella are kicking off 2022 with this iconic smash dance record. Guetta’s done it again and I for one am so proud to be part of another one.”

Ella added: “I am unbelievably excited about this record! This one has been cooking up in the oven for a while so finally letting the world hear it means so much! This song is all about the empowering & wild feelings that love & friendship can do to you! Working with Becky & David has been an absolute dream & I loved every second of writing this song & the whole creative process! Also shooting the music video was so much fun because it was like making our own mini ‘Thelma & Louise’ movie!! I think bringing the song to life through the narrative & visual aesthetic will really help tell the story of how two best friends only need their own self love & each other to take on the world & never look back!”

A collaboration between three artists at the top of their game, the single is sure to be one of the most exciting dance releases this year.