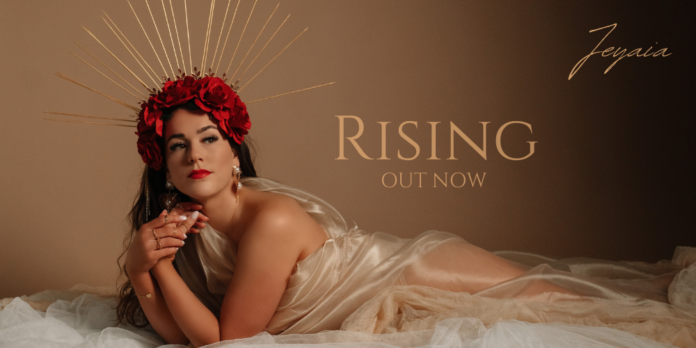 The song tells the narrative of liberating oneself from the shackles of conditional love and discovering the reality that all a person desires may be found within the self. “Whenever we seek anything outside of ourselves, it implies we are incomplete within. When we realize the truth of all that we are, this is true self love. This is freedom” Jeyaia explained.

As a testament to its growing popularity, there are now three unique remixes available for “Rising.” The Stonebridge Remix, The FifthGuys and Coffeeshop Remix, and the Going Deeper Remix managed to generate over 1000 playlist adds on Spotify alone. Additionally, Jeyaia has been progressively amassing a considerable number of followers on YouTube since the release of the “Rising” music video last December.

Currently charted at #29 on the UK Music Week Commercial Pop Chart and playing on numerous terrestrial radio stations in America, such as Sirius XM BPM, “Rising” is showing that it has the ability to find appeal in both the United Stated and abroad.

On first listen, Jeyaia’s voice bursts through the soundwaves with silky smooth tones and creamy harmonies as she blends neo-soul and old-school R&B. “Rising” is a song about liberation from the shackles of conditional love while adopting love from within, which leads to empowerment and independence to pursue one’s goals relentlessly. “Rising” exudes the energy of self-empowerment and freedom. To me, true freedom is knowing who we really are. Unconditional love is a feeling; when we are connected to the truth of who we are; knowing we are divine extensions of the universe, and we have everything we need within” Jeyaia shared.

Jeyaia’s musical prowess is undeniable, partly thanks to the fact that she grew up in a musical household, with her mother being a singer and saxophonist and her step-father being a singer and pianist. Surprisingly, it seems that both her parents are in the same blues band, with some of Jeyaia’s memories included being nestled among the many amps stuffed in the back of the van and dancing under the summer night sky as they fall asleep in the grass to the sentimental sounds of Duke Ellington, Nina Simone, Ella Fitzgerald, and Sarah Vaughan.

As her career takes off with her debut single, the resulting traction and the number of fans she has gained have given her massive encouragement to not rest on her oars. The lyrics from her debut single do nothing but encourage people to see themselves in a new light and embrace the strength they possess from within.

“I’m honored to share my voice with the world and inspire other awakened souls to remember their divine truth” she said.