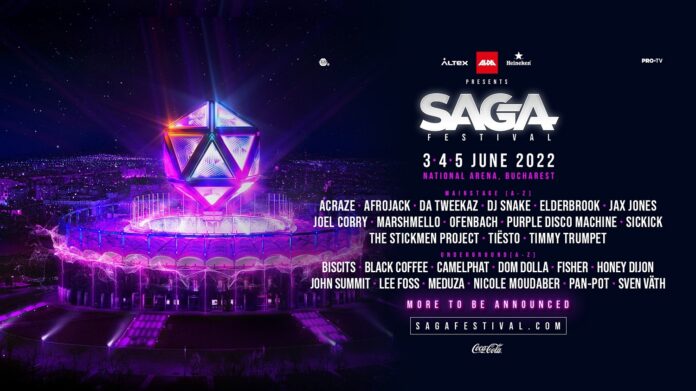 Fresh new artists have been announced as part of the 2022 line-up for the second edition of SAGA Festival in Romania. The latest additions will take to the stages across 3, 4 and 5 of June later this year, in the festival’s magnificent new home, National Arena in Bucharest. With an endless number of hits and adoring fans between them, the likes of DJ Snake, Tiësto, Elderbrook, Ofenbach, FISHER, Meduza and Sven Väth are among many new additions to an eclectic line-up coming to Romania this summer. Brandishing headline names and next-level production, this year the festival poses an audiovisual experience unlike any before it as thousands of fans from over 30 countries come to witness explosive performances atop the various SAGA stages.

Last year the event forged an untouchable reputation, with many unforgettable mainstage moments provided by the artists and production alike in Romaero. The huge additions of DJ Snake and Tiësto join Afrojack, Black Coffee, Marshmello, Nicole Moudaber, Pan-Pot, Purple Disco Machine, Sickick and Timmy Trumpet on a star-studded roster for 2022. With epic potential for venue-wide pyro and visuals again this year, their performances are set to be among their most memorable to date.

DJ Snake will land in the capital, fresh off the back of two huge collaborations with Future and Malaa, and will be looking to prove himself in emphatic fashion in front of an expectant SAGA crowd. Dutch dance heavyweight, Tiësto, will be looking to do the same, carrying a career-long reputation and immensely successful productions into his performance in the heart of Bucharest.

What makes the festival so unique, is the way it champions a vast range of electronic music styles across its many stages, drawing in esteemed creatives in doing so. This year that same versatility is on display as the likes of The Stickmen Project, ACRAZE, Jax Jones, Camelphat, Joel Corry, Da Tweekaz, Honey Dijon, Dom Dolla, Biscits and John Summit are all invited to Romania for the first time, to SAGA Festival.

Jax Jones will arrive in incredible form, globally revered as one of the most innovative and successful DJs and producers around at the moment. Camelphat will also make the journey from the UK to add extra flavour to this year’s line-up, with their vibrant tech-house sounds in demand worldwide. No stranger to chart success either, viral sensation ACRAZE is set to take to the decks with his hit “Do It To It” in-hand to send crowds into a frenzy. The Stickmen Project also bring a unique concept to Bucharest, combining music and light in live performances that must be seen to be believed. Honey Dijon adds to the sonic diversity on offer; she has performed at hundreds of events, clubs, art galleries, and fashion shows in recent years, collaborating with the likes of Louis Vuitton and Dior in the process. Transcending dance sub-genres, the Romanian public will also be able to enjoy some Hardstyle during the 2022 edition, as esteemed Norwegian outfit Da Tweekaz are set to add extra energy during the weekend. More names are to be announced soon.

The “Take-Off Edition” of the festival was a huge hit and the follow-up edition will aim to be again when it takes place in its new stadium setting this summer. SAGA will build upon its young-but-stellar reputation by drawing in around 200 of the most appreciated international and local artists in the name of mainstream, house and techno, not forgetting a formidable audience, next-level production and surprises to suit. While early bird tickets for SAGA Festival 2022 have sold out, 3-day GA passes are available at the next price tier, at €120 + taxes. To mark the announcement of Phase 2, however, 3-day GA passes are at the special price of €110 + taxes, for the next 72 hours. All pass types can be purchased here.