Some tracks are released into the wild as natural born hits and others simply need to find their footing. Case in point is Öwnboss and Sevek’s ‘Move Your Body’, which has proven itself as an absolute headturner after a series of viral posts on Instagram and TikTok in early November.

Since, the track hasn’t only been heard on those platforms hundreds of millions of times, but its success has translated to significant editorial and radio support around the world, being put into rotation by tastemakers such as Spotify’s infamous Beast Mode and Mint playlists, as well as SiriusXM’s Diplo’s Revolution. With daily streams now triple what they were in early December, it’s clear that ‘Move Your Body’ still has more than enough gas in the tank to continue spreading like wildfire.

Although ‘Move Your Body’ steadily grows at an unprecedented rate, neither Öwnboss or Sevek are strangers to sonic success. Öwnboss has etched his place in Brazil’s dance scene by collaborating with some of the country’s finest tastemakers in both Vintage Culture and Bruno Be on tracks like Intro (Rework) – Remix, and has amassed close to 100 million streams with singles such as ‘Take Me Out’, ‘Touch Me’, and ‘Heavy Dirty Soul’. Öwnboss has already received global support from dance music titans such as Tiesto, Hardwell, Sander Van Doorn, and Afrojack, but the standalone success of ‘Move Your Body’ is quickly pushing the Brazilian musician’s profile to the next level.

Another one of Brazil’s most promising upstarts, Sevek has found close to 2 million monthly listeners thanks to his unique brand of smoothly alluring bass house. Already known for releases like ‘Up’ and ‘Till the Roof’ (a play on Eminem and the late Nate Dogg’s 2002 collab), it’s clear that the rising producer has turned the page with the release of ‘Move Your Body’. 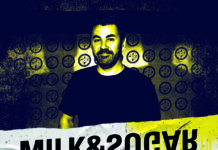 A new chapter for Milk & Sugar !