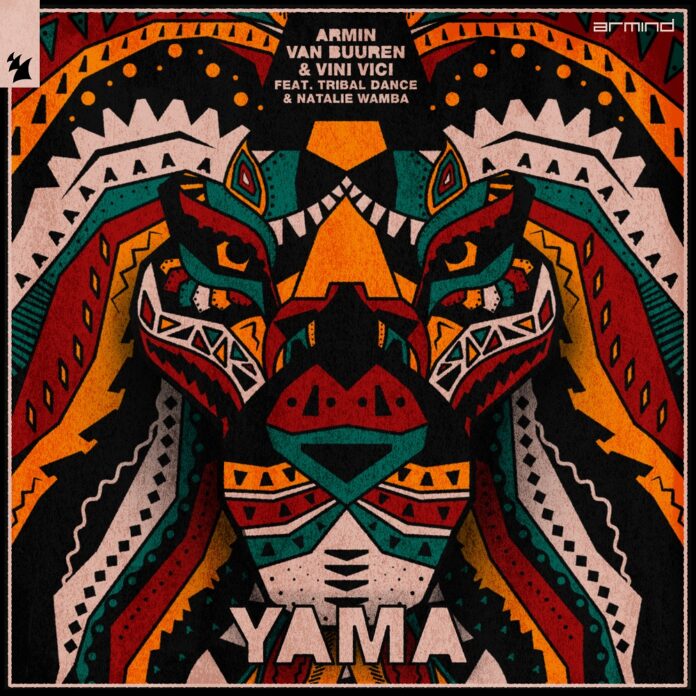 It has been a few years since the global success of ‘Great Spirit’ (well over a hundred million streams on Spotify) and ‘United’ (over 40 million Spotify streams), but Armin van Buuren and Vini Vici haven’t lost any of the momentum since. Both acts have been turning heads with a myriad of dance floor bangers and high-profile collabs, and they now raise the bar even higher with an incredible artwork design, a music video shot during the A State Of Trance ADE event at AFAS Live, and of course a super-energetic record designed to blast sound systems to bits: ‘Yama’ (feat. Tribal Dance & Natalie Wamba).

Featuring the uplifting vocal chants of Tribal Dance and Natalie Wamba, ‘Yama’ instantly makes its mark as a ground-shaking collision of Armin van Buuren and Vini Vici’s globally renowned signature sounds. From the uplifting and openhearted intro to the inevitably colossal beat drop, this track is sure to cause some serious dance floor damage with every play.

Armin van Buuren: “I had a blast working with Vini Vici on ‘Great Spirit’ and ‘United’ back in 2016 and 2018, and although a few years had passed since, I always felt that it’d be great to do a third collab. So we all jumped at the opportunity when it finally arose and ‘Yama’ is the outcome. Our trademark sounds are especially compatible and I’m positive ‘Yama’ will be ruling dance floors for a long time to come.”

Vini Vici: “Dropping this tune b2b with Armin van Buuren during last week’s ASOT event was an amazing experience, and we’re super excited about our third collaboration! It took us a while to produce this song and we did it during the crux of the pandemic. Needless to say, it took a lot of hard work to get this final result.”

Armin van Buuren, who was recently voted in the Top 5 of DJ Mag’s annual Top 100 DJs list for the twentieth consecutive year, has long been a global ambassador for electronic music. The five-time #1 DJ in the world and current #3 has seven full-length artist albums to his name and continues to cultivate a massive worldwide following through his weekly A State Of Trance radio show, event series and album series, reaching 40 million listeners from 80 different countries on a weekly basis. In non-COVID times, Armin van Buuren headlined more than 150 shows per year at leading festivals and venues around the world, including Electric Daisy Carnival (Las Vegas, New York), Ultra Music Festival (Miami) and Tomorrowland (Belgium) plus residencies on Ibiza and in Las Vegas.

Regarded as the fastest rising psytrance artists of their generation, Afula natives Matan and Aviram – best known as Vini Vici – saw ‘Great Spirit’, their breakout collab with Armin van Buuren, become the most played track of Tomorrowland 2017. In between high-magnitude collabs with the likes of Dimitri Vegas & Like Mike, Steve Aoki, R3HAB and more, the pair became the first ever psytrance act to play the main stages at Tomorrowland and ULTRA Music Festival and to perform at Lollapalooza before adding reputable festivals and events such Electric Daisy Carnival and A State Of Trance to their gig list. A little under a week ago, Vini Vici were voted #20 in DJ Mag’s annual Top 100 DJs poll, their highest position to date.