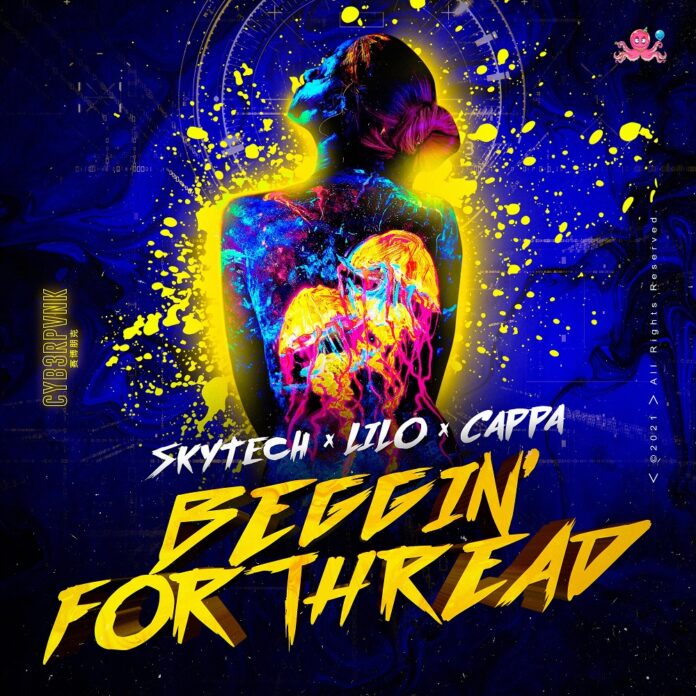 CYB3RPVNK veteran Skytech returns to R3HAB‘s label with his rendition of BANKS‘s hit “Beggin For Thread,” an energetic and big-room influenced gem produced in collaboration with South Korea-born, Sweden-based master of covers and reworks LILO and LA-based singer/songwriter Cappa, whose past collaborations include working with SNBRN, Justin Caruso, TELYKast, and more. Riding on a deep, groovy bassline with a steady buildup, Skytech brings his dancefloor-friendly style to the indie classic while preserving the original’s emotive vocals. “Beggin For Thread” follows Skytech‘s recent single “Scrolling Up” with Fafaq as All That MTRS, as well as his remix for R3HAB, Luis Fonsi, and Sean Paul‘s “Pues.” LILO is known for his official covers of Kylie Minogue‘s “Can’t Get You Out of My Head” and Milky Chance‘s smash hit “Stolen Dance.” See below for what the artists had to say about making their “Beggin For Thread” cover:

“BANKS‘s original song “Beggin For Thread” was one of my personal anthems of 2014, so when I first heard LILO‘s electronic demo version, I immediately fell in love with it, and I had to jump on it to finish the production. The process was a lot of fun, and I believe I added some Skytech flavor to it.” – Skytech.

“I really enjoyed working with Skytech and Cappa on this beauty and hope to be working with them in the near future again. I hope you all enjoy listening to it as much as we enjoyed creating it. It’s an honor dropping this tune on one of my idol’s label!” – LILO

“The process of working with Skytech and LILO was great. They already came up with the idea for the track. Since we’re located in different parts of the world, I went to the studio and laid the vocals with my engineer. We actually communicated a lot over Instagram. It was a fun process!” – Cappa

Mateusz Dziewulski, better known by his artist name Skytech – is already a household name in his home country of Poland, and the rest of the world is soon to follow. His name first appeared on the map when R3HAB discovered his original track “Tiger” and then helped Skytech put final production touches on it, proving to be a winning team after “Tiger” skyrocketed to over 100M streams on all platforms. Since then, the two have worked on numerous tracks together via the CYB3RPVNK imprint, such as “Fuego,” “What You Do,” “Hyperspace,” “Starflight,” and more, fusing their sounds to make music that is club and festival-friendly while never sacrificing substance and soul.