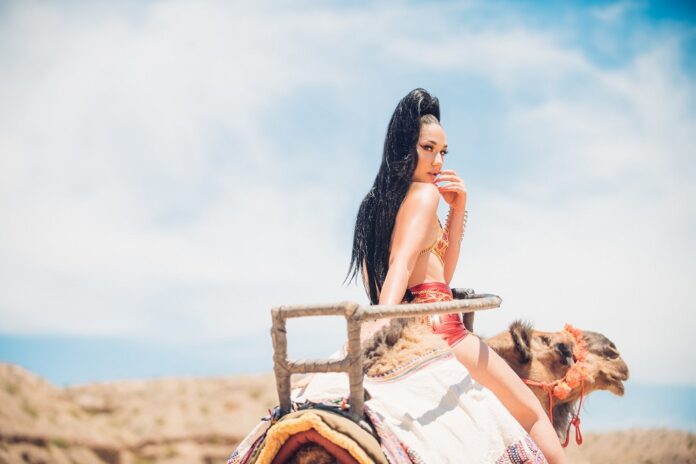 • As both a Singer/Songwriter and a vocal producer – What’s your favourite aspect of making music? Do you prefer one to the other?

Although I love pieces of each of these aspects, I would have to say the most exciting part is actually recording the vocals. To me that’s my time to bask in the energy of what I’m creating. It’s the moment where the song starts taking shape.

• As a vocalist you’re renowned for your chameleon-like approach. Are there any particular genres / styles that you are drawn to?

I feel like my taste and interest change as I grow as an artist. Currently I’m heavily invested in creating my own pop sound, so I’ve been gravitating more towards a mixture of hip hop, dance, and pop. At the end of the day I truly love experimenting, and never like to limit myself in anyway.

• Can you tell us the driving forces behind ‘No Evil’?

The driving force was definitely the thought of how I was going to introduce myself to the world as a solo artist. I really wanted to come out with a bang, musically, sonically, and visually. For the last 6 years I’ve been molding into the sound the DJ/producer decides on, so the most important thing for me was to have something I could call my own. I’m very blessed to have worked with KSHMR, Reid Stefan, and Nash Overstreet in the development of the sonic landscape my pop project will be.

• The music video was killer. What were the inspirations for this production?

Thank you! The baseline and concept of the song is very quirky, so I wanted creative, fun, colorful edits to represent that vibe. In terms of concept, the song is a play on the evils that have plagued humanity since Egyptian times, so I wanted to have the Egyptian theme with a modern twist. We found this beautiful ranch in the desert with Camels and were able to film with them which brought the video to another level. I’m really passionate about making a song an experience, so my goal was to immerse the viewer into a different world.

• How did it feel having your latest release ‘No Evil’ with KSHMR signed to Dharma?

It felt amazing to have released it with KSHMR because we’ve become so close over the last year, and it was the first step in our partnership. It was a risk releasing a pop record on an EDM label, but it was a risk I was willing to take.

• Can you tell us more about how your collaboration with KSHMR came about?

A couple years ago a mutual friend in the industry connected us through text because he needed a new singer for a song he was about to release. I recorded the vocal, but it didn’t make the cut. Later on he asked for stems for another song, that’s currently unreleased, and then a couple months later he sent the instrumental for “Devil Inside Me”. The rest is history! He’s one of the only people I’ve worked with that I feel just gets me and I get him. Making music with him comes so naturally, like we’ve been doing this together for lifetimes. That’s the only energy I’m interested in having with someone in the studio, as it’s the only energy that gets me my best work.

• Have you spent a lot of time in the studio during lockdown?

Luckily my boyfriend, Reid Stefan, and I have a beautiful home studio that we work in everyday. We also quarantined with KSHMR so that we can finish albums worth of songs for both of our projects.

• What do you have in store release wise and are there any other exciting projects on the horizon?

We’re currently planning my next single which shows a more vulnerable side of me, which I’m very excited about. Although I’ve slowed down my focus on EDM collaborations, I still have a ton of collabs coming out with great artists. I also have my own vocal label on Splice, so I’ve been very busy producing packs with different singers. It’s a very exciting and busy time for me!

• Finally, do you have a quick message to your fans?

I would love to say thank you to everyone who has shown me support as I transition my focus from EDM to pop. This is truly just the beginning of a wild ride, and I’m so excited to see where it takes us!