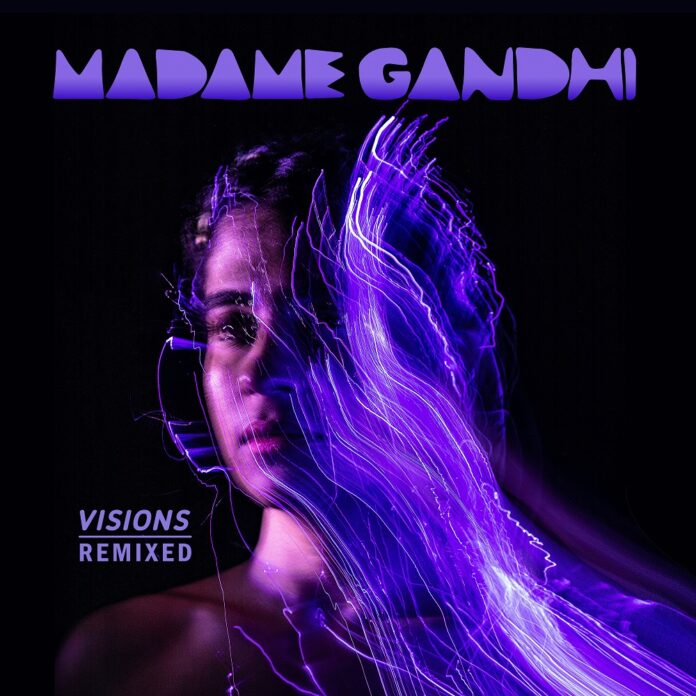 MADAME GANDHI today releases VISIONS REMIXED, a globally-sourced collection of remixes for the five tracks encompassing her 2019 critically-acclaimed Visions EP.  Each of Madame Gandhi’s original tracks from her latest EP have been completely reimagined by a diverse group of female producers.  With help from RIOBAMBA, DRIK BARBOSA & MC SOFFIA, SARAH FARINA, ARUSHI JAIN and JEIA, Visions Remixed covers a wide spectrum of dance music across the globe, imbuing the EP with everything from Moombahton to UK garage, from Afrobeat and Baile funk to techno.  Percussive, warm and upbeat, the resulting EP repurposes Madame Gandhi’s original sound to create a distinct collection for dance or fitness communities and beyond – listen here.

Of Visions Remixed, MADAME GANDHI says, “Only 2% of the world’s music producers identify as female, which means that an even smaller percentage identifies as gender non-confirming or trans. For that reason, we have to be intentional about creating visibility for ourselves, and putting each other on whenever we have the chance. I asked some of my favorite producers and MCs to each pick a song off of my album Visions and come up with a remix for it. Each artist did an incredible job, and what resulted was a global dance album of Visions reimagined, a gift during a time where I believe all of us could use a bit of a positive pick me up.”

Selected as 2020 TED Fellow for her commitment to creating meaningful and positive change, Madame Gandhi also debuts her most recent TED Talk entitled “Stop dancing to the sound of your oppression” today – watch here.  The discussion takes place as part of TED2020 Uncharted, with Madame Gandhi joining multidisciplinary individuals across the globe for an online gathering of conversations, sessions and performances.  She returns to the TED Stage after her 2018 talk about the importance of making music with a message accessible, which now has over 200k views – watch here.

Today’s release follows the June debut of Madame Gandhi’s official video for “Waiting For Me,” which garnered extensive buzz from Billboard, BUST, WIRED, VOGUE and more for its powerful and imaginative storytelling.  Madame Gandhi also made her NPR Tiny Desk (Home) Concert debut this summer, performing tracks from both her Visions and Voices EPs – watch here.  With an imitable pairing of complex percussive rhythms and empowering messages of liberation, Madame Gandhi is known for her passionately uplifting body of musical work that continues to elevate the female voice and redefine notions of gender, identity and politics.  Having released her first two EPs as part of an overarching short-form album trilogy, most recently 2019’s Visions, Madame Gandhi begins her new partnership with Sony Music Masterworks ahead of the third and final installment in the series.