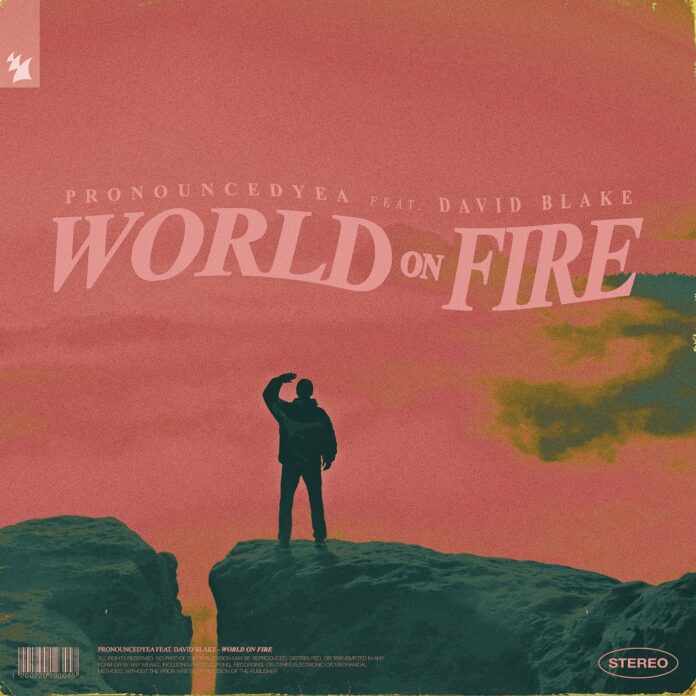 After making his mark on both Armada Music and the entire dance music realm with ‘Freedom’, ‘Wait For You’ and ‘Still Here’, pronouncedyea keeps the momentum going with his fourth single of 2020. Embroidered with the unique vocal touches of L.A.-based singer-songwriter David Blake, ‘World On Fire’ is an empowering record bearing heaps of crossover potential.

Bringing the heat in any kind of dance music environment, pronouncedyea and David Blake’s first-ever link-up offers quite a bit of clubber’s attitude whilst maximizing its airwave appeal. Featuring the standout vocals of David Blake atop an edgy and infectious instrumental, ‘World On Fire’ will send sparks flying with every play.

Pronouncedyea: “‘World On Fire’ is a type of song I had been wanting to make for a long time. When I heard the vocals for the first time, I knew that it was perfect for the huge halftime drop. The first draft came as a last song during a chill session one night in New York. We had huge speakers and I started the drop with just a sub. It sounded so huge that i just wanted to keep that feeling throughout. Big emotion is the vibe and I’m super stoked i was able to connect with David Blake to make this one.”

David Blake: “The song is about sticking to what you’re passionate about despite all the struggles and pushbacks that occur in our everyday life, and hoping that you can bring your own piece of change to the world. We all have our goals and it’s easy to get intimidated these days by the competition that surrounds those goals. ‘World On Fire’ is about tuning all that out and focusing on doing you the best way you can and to never stop, because that’s really all that’s in your control in the end.”

Following his 2016 debut, 23-year-old producer pronouncedyea is quickly creating a sense of ubiquity within his corner of the music industry. Having produced four #1 tracks on Hype Machine in six months, the Syracuse, New York-based artist is fasttracking himself to stardom, attaining an enviable level of success through a combined total of over 40 million streams. Currently signed to Armada Music, pronouncedyea draws his inspiration from the sounds of his woodsy upbringing and brings it all to life with his rhythmic vocal chops and catchy hooks, all formed by a no-holds-barred mentality when it comes to perfecting the sounds around his melodic beats.