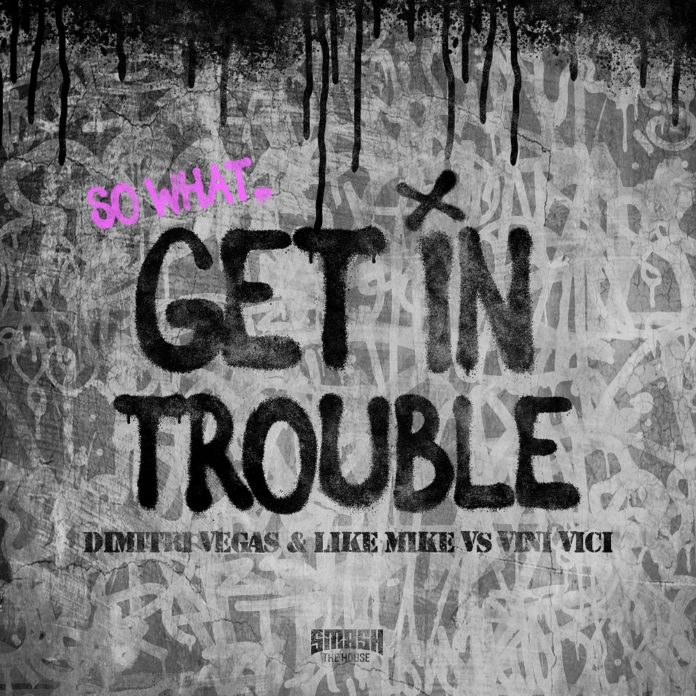 Wasting no time in following up their recent smash collaborations ‘Clap Your Hands’ with W&W and Fedde Le Grand and ‘Raver Dome’ as 3 Are Legend alongside Steve Aoki, Justin Prime & Sandro Silva, the latest team up sees the Belgian brothers unite with psytrance heavyweights Vini Vici for ‘Get In Trouble (So What)’. The coming together of these musical juggernauts is as heavy as you’d expecting, combining both duos extensive knowledge in music production and ear for a hit to great effect, utilising a standout sample that elevates the track skywards.

A fighting chant builds towards the fast paced drop and sets the tone from the start, as clever use of LFO on a synth cranks up towards the first breakdown, which introduces the iconic vocal that is sure to whip fans into a frenzy. This is carried into the main break, where the familiar guitar lead joins the vocals before switching up to accommodate a high pitched lead that continues into the beat.

Dimitri Vegas & Like Mike and Vini Vici have a strong history of partnership, with the latter’s premier psytrance label Alteza working under the Smash The House umbrella, and that synergy is on show with ‘Get In Trouble (So What)’, which follows on from previous heavy hitting collaborations such as ‘Untz Untz’ and ‘The House Of House’. Both acts continue to reign supreme in their respective worlds, and their latest work together once again highlights the familiarity in the studio, and the ability to fuse both sounds into an unforgettable anthem that is set to be one of the standout releases of the year. Grab your copy of ‘Get In Trouble (So What)’, out now via Smash The House!