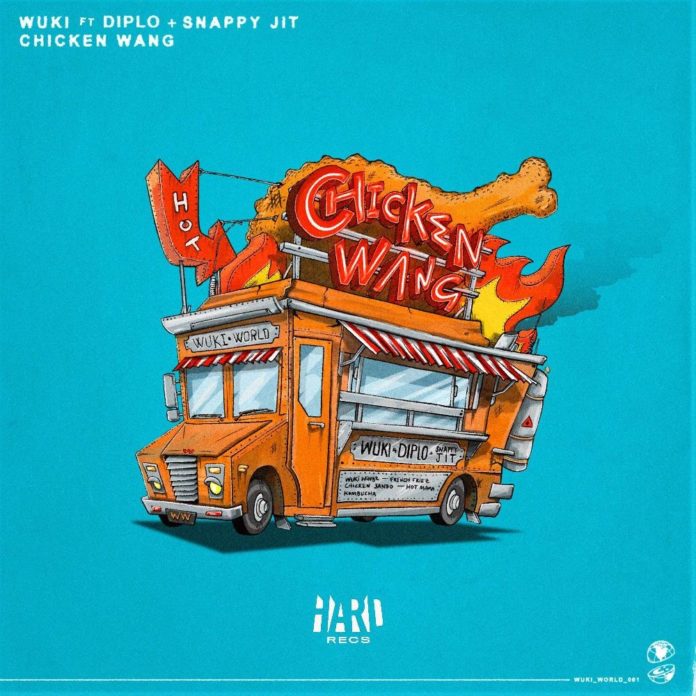 Wuki and Diplo drop their highly-anticipated new single ‘Chicken Wang’ feat. Snappy Jit out Thursday, May 14th. Set for release on HARD Recs, ‘Chicken Wang’ has been a long time collaboration between the two producers and is ready to make a huge impact worldwide.

‘Chicken Wang’ delivers the perfect high-energy and twerk-ready bounce sounds that global audiences around the world have come to love from Wuki and Diplo. The track’s raw power kicks-off with pounding drum samples, whistle blowing notes mixed with the up tempo, sped up and vocal chant style from Snappy Jit. ‘Chicken Wang’ is a fun and intoxicating track that depicts Wuki’s ability to create hard-hitting club shakers paired with Diplo’s return to his classic trap sounds.

In celebration of the track’s release, Wuki has partnered with a local LA wing shop for a special fan competition online where a few lucky winners will get the chance to have free chicken wings delivered by Wuki himself to their homes in LA. Fans outside LA can still win a wing delivery and personal FaceTime with Wuki.

Recently signing to Insomniac’s HARD Recs, Wuki revealed a new album is on the way with ‘Chicken Wang’ as the first release from the upcoming collection. Wuki has been engaging heavily online with fans via his social media and Twitch channel, where he’s been streaming live DJ sets, making his famous bootleg edits, giving aspiring producers feedback on their demos and engaging in fan Q&As. He’s also taken part in livestreams with Insomniac, Proximity’s Digital Mirage, Shaq’s Bass All-Stars and more.  Fans can expect more exciting content to come online with ‘Chicken Wang’ available on all streaming platforms Thursday, May 14th via HARD Recs!