20-year old songwriter and producer CADE is on fire. Unleashing his first solo release on Spinnin’ Records in 2016 with the ‘Care EP’ (of which the title song reached worldwide success, counting over 3.5 million Spotify streams by now) he recently followed this up with his second big Spinnin’ release, ‘Sorry For Myself’.

Meanwhile, the US artist took off with other singles as well. He presented a collaboration with Mokita, ‘Monopoly’ that managed to gain over 10 million streams, featured on Dastic’s 2016 hit ‘Let Me Love You’, which reached 9 million Spotify plays since its release, followed by Breathe Carolina’s and Bassjackers’ banger ‘Can’t Take It’, counting over 4 million Spotify streams.His most recent collab with Cheat Codes reached 5 million streams within two weeks after release, the remix of Maggie Lindemann’s ‘Pretty Girl’ has now crossed 100 million streams.

CADE has performed alongside artists such as G-Eazy, Steve Aoki and Jason Derulo, and has written with world-renown artists including Paul Oakenfold, Vicetone, Boehm and more. If CADE is not on the stage, he is tirelessly writing and producing in the studio. CADE’s singles have already racked up close to 20 million Spotify streams; which further proves that his distinctive brand of R&B-infused electronica is well-deserving of the international spotlight.

And now, CADE returns with the uplifting tune ‘Where We Left’, featuring the artist’s trademark sound, inspired vocals and sweet electronic vibes. R&B taken next level, this record proves the point even more.

Wongo teamed up with Owie for a fresh dose of house music! 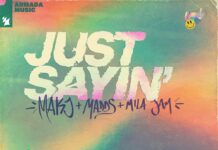