Dario Darnell, who is better known as Youngr has been making waves in the dance music scene for quite some time now. Ever since coming in the public eye, he has continued to impress with his releases and his performances, with his fans continuing to praise him for the things he does. Currently, Youngr has embarked on his very own tour, that has already seen him perform in Berlin, Paris, San Francisco, Los Angeles and more.

Thursday, on March 23rd he will be playing at Corona Electric Beach, with this event being set to take place at South Beach’s premier hotel, Shore Club, from 1pm-7pm. For this one, he will be joined by Chromeo and more. The event is free with RSVP, so if you want to attend, you can submit your RSVP here. We’ve recently had the chance to speak to Youngr, so make sure to check out our exclusive interview below!

1 – Hello YOUNGR! How have you been lately?

I’VE BEEN BLOODY FANTASTIC, YOU?

2 – Firstly, we want to know. When did you first feel that you had made it as an artist/producer?

I still don’t feel like i’ve ‘made it’ …. there’s still a lot more to do! but it’s nice to feel like the world is listening now. i’ve been producing and performing for over 10 years now, and it’s been an amazing journey. Lots more work to be done!

3 – What has been the most rewarding thing about making music in your career to date?

It’s probably the private messages i get from musicians and producers saying I’ve inspired them to make music, or to learn the drums etc. it’s amazing to think i’m inspiring other people!

4 – What would you say is the one thing your fans would be surprised to hear about you?

5 – You’re performing with Chromeo at Corona Electric Beach this week, tell us where is your favorite place to enjoy a Corona? What should we expect from this performance?

Favorite place to enjoy a Corona is in a bath filled with limes. You can expect some tasty treats.

6 – Aside from this show, seeing as festival season is right around the corner, which festival are you most excited to play?

I can’t wait to play Fieldview festival in the UK. Such good vibes.

7 – What else have you got coming up in the next months?

Releasing my next single, “Monsters,” on the 14th April. Can’t wait to unleash it!!

I would like a pet Llama. If you have a hairy chest, be proud of it. x

9 – And in the end, tell us, if you could work with any artist from past or present, who would it be and why?

James Brown because he’s the funkiest fucker on the planet. 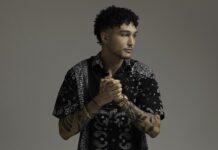